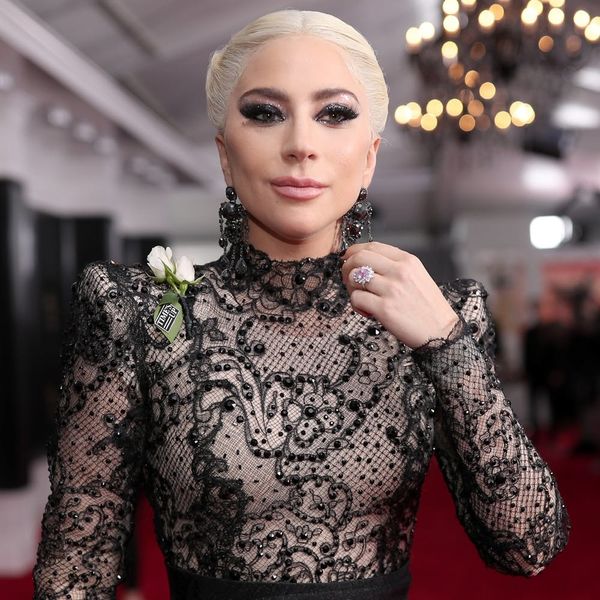 Lady Gaga was one of the first guests to show up at the 2018 Grammy Awards, and she immediately sparked some major excitement, not just because of her fab gown or her intricate braid, but also because of the bling on her left hand. Despite the fact that the singer’s rep reportedly denied that Gaga was engaged to Christian Carino back in November, the huge pink diamond ring she showed off on the red carpet has people thinking otherwise.

Arriving for music’s biggest night on Sunday, January 28, the “Joanne” performer looked striking in a stunning, custom, Armani Privé design. Picture-perfect smokey eye makeup set off her platinum blonde hair — which was even more impressive from the back, where it crisscrossed with black strings.

And then, of course, there was her ring.

Gaga has been wearing the massive pink gem for at least a month or so, but this is the first really *good* look we’ve gotten of it on the red carpet. The center stone certainly makes a statement, and it’s even more lovely up close, when you can see that it’s surrounded by a circle of smaller white diamonds.

Thank you Richard, Bill and Chris for making my dream come true! I was made for this town, and I can’t wait to light up the Park Theater like never before! 💝

Gaga — who is nominated for Best Pop Solo Performance and Best Pop Vocal Album, and also performed “Joanne” and “Million Reasons” during the show — was spotted earlier in the day spending time with her love. Mother Monster has been dating the talent agent since the spring of 2017, but they don’t seem to be in any rush to confirm the public’s suspicions that they’re headed to the altar.

For now, we’ll just have to settle for their sweet social media posts and any future glimpses at that eye-popping ring.

Do you think that pink gem is Lady Gaga’s engagement ring? Let us know @BritandCo!

Desiree O
Desirée O is a ‘Professional Bohemian’ who loves anything and everything related to the arts, entertainment, and pop culture. She ADORES being a ‘Newsy’ for Brit + Co, covering all of the latest tidbits of awesomeness that you want to read about. When she’s not writing, she’s either making messy art, going on long adventurous walks with her camera, or poking around over at bohemianizm (http://www.bohemianizm.com/). You can find out about Desirée O and her work at http://DesireeO.com/ or follow her on Twitter @DesireeO.
Awards Shows
Celebrity News
Awards Shows Grammy Awards Red Carpet