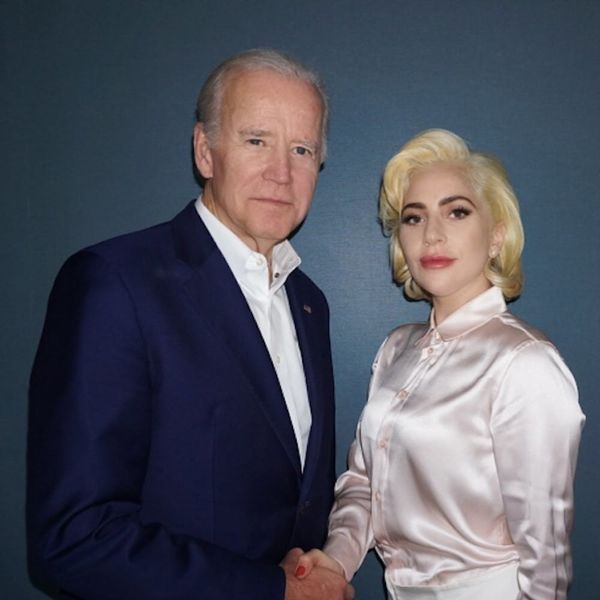 Lady Gaga has been an ongoing source of inspiration for survivors of sexual assault. Not only has the pop star opened up about her own experiences in an effort to help give others the courage to use their voices, she’s been plenty vocal about advocating for others, as well, both through her words (Gaga famously spoke out against Kesha’s alleged abuser, Dr. Luke) and her music, even writing the ballad “Till It Happens to You” for the campus rape documentary, The Hunting Ground. Now, she’s teamed up with Joe Biden for a new PSA that has an incredibly important message: It’s on us — all of us — to prevent assault and harassment from happening.

The “The Cure” singer and the former Vice President both released a new video to their social media accounts in order to inform their followers about It’s On Us, a new initiative which encourages everyone to take a pledge to “recognize that non-consensual sex is sexual assault” and to help bystanders “identify situations in which sexual assault may occur, intervene in situations where consent has not or cannot be given, create an environment in which sexual assault is unacceptable and survivors are supported.”

Honored to work with a woman of great courage, my friend @ladygaga. With her leadership, and your help, we can change the culture. #ItsOnUs https://t.co/ZcaOqncopa

“We want to make it real clear: It’s on us,” Biden says in the video message. “It’s on everyone to intervene, to stop abuse when they see it and when they hear about it.”

Gaga adds, “I am a sexual assault survivor and I know the effects, the aftermath, the trauma — psychological, physical, mental. It can be terrifying waking up every day feeling unsafe in your own body.”

The 31-year-old wants those who are suffering to know that help *does* exist. “[W]e’re here to remind you that it’s important to reach out to someone in your life that you can trust and to know that they will be there to help you; there will be someone to listen.” Pointing to herself and Biden, she then states, “‘Cause you know what? It’s on us.”

A message from me & my buddy Vice President @JoeBiden @ItsOnUs to stop sexual assault. Go to https://t.co/aMd5silSst #ItsOnUs to help. 🇺🇸 pic.twitter.com/w5JGRCd2z8

Watch their plea to get involved above.

If you need someone safe to talk to about being sexually assaulted, you can seek help from the National Sexual Assault Hotline by calling 800-656-HOPE (4673) or by heading to their website to use their chat feature.

Will you be taking the It’s On Us pledge? Let us know @BritandCo!

Desiree O
Desirée O is a ‘Professional Bohemian’ who loves anything and everything related to the arts, entertainment, and pop culture. She ADORES being a ‘Newsy’ for Brit + Co, covering all of the latest tidbits of awesomeness that you want to read about. When she’s not writing, she’s either making messy art, going on long adventurous walks with her camera, or poking around over at bohemianizm (http://www.bohemianizm.com/). You can find out about Desirée O and her work at http://DesireeO.com/ or follow her on Twitter @DesireeO.
Politics
Gender Issues
Politics