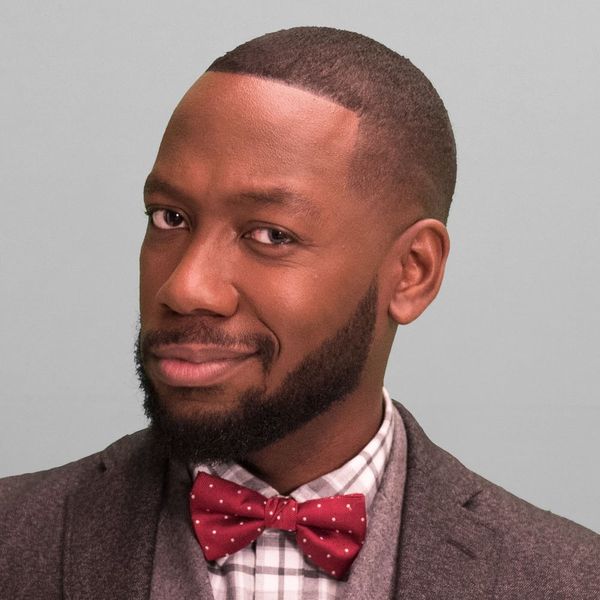 It’s the end of an era. After six years on air, the final season of New Girl will premiere on April 10, signaling the final chapters for Jess Day and her loftmates and breaking the hearts of their loyal fans the world over — right along with those of the cast members.

While you might expect a conversation with one of the show’s biggest stars, Lamorne Morris (AKA Winston Bishop), to be somewhat… well, sad, given the circumstances, he’s not one to wallow. Rather, Morris is jovial. In the 15 minutes we spent on the phone with the actor, he had us cracking up as he recounted some of the more hilarious behind-the-scenes moments we DIDN’T get to see on TV.

“I was called porcelain on set [for my] tiny little freak injuries,” he shares. “I do my own stunts. This is a real thing — I was getting off a couch and dislocated my thumb literally just pushing myself up… My thumb just went straight down and popped out of place — you can hear that pop on camera.”

Fans might also recall that time his character stubbed his toe on a chair while arguing with Schmidt in the season 3 premiere. “I really hurt my toe,” the Game Night actor admits. “I was in a ton of pain.”

He credits his ability to work through such unexpected scenarios to his improv background. “Second City [the legendary Chicago comedy enterprise that’s spawned many an SNL cast member, Tina Fey and Amy Poehler included] definitely helped me in that category,” the Glen Ellyn, Illinois, native says. “That’s a skill that you have to have. The character becomes more relatable…. If I get stuck on a line, even if it’s dramatic, I’ll just say something funny to loosen things up.”

Often, it’s a risk that pays off. That whole Theodore K Mullins bit from season 1 of New Girl, for instance? All Morris. Storylines for the character were written for him after the star ad-libbed a monologue scene in which Winston is rudely awoken from a Saturday slumber. “[The director] gave the signal for me to keep talking and all of it made it [into] the final cut… I got a lot of great feedback from fans,” he recalls.

We see that same type of on-your-feet thinking in Morris’ new flick, Game Night, in which he plays the likable, if slightly insecure, Kevin. As his costar Kylie Bunbury told Den of Geek, the Denzel Washington impression we see Kevin perform onscreen was Morris through and through. In fact, a lot of the character was — maybe even moreso than Winston.

“[There’s] a lot of Winston in myself, [but] in Game Night, you can see a more realistic, down-to-Earth, sane human being,” he tells us.

We’ll soon have plenty more opportunities to witness the comedian’s wit on the small screen. For starters, he’ll star in the scripted docuseries/drama Valley of the Boom on National Geographic, which will explore the surge of tech companies in the ’90s.

He also has a brand new partnership with Buick, which sees him taking on a role as the NCAA Dean of “Fandom University,” offering up helpful tidbits of info to basketball fans, on topics such as team colors, “culinary arts” (read: tailgating), and psychology. “I am the perfect person for this,” he says. “I know everything about everything.” Oh, and did we mention he also has a comedy album in the works? “I’ve got a lot of irons in the fire,” he shares. We’ll say!

Still, the 34-year-old can’t deny that he’s going to miss his roots.

“To start off, it was exciting,” he says of filming season 7 of New Girl. “This one was a fun situation, because we knew this was the final hurrah… There’s a lot of homages to different things from past episodes that we know fans in particular will love. A lot of times on the show, you’re… setting up storylines that can last for seven years. [This time], we just threw everything in there and kind of had a lot of fun with it.”

For Winston, there’s also a lot of resolution to be seen. “The final season takes place three years in the future,” he tells us. “You’ll see a lot of storylines that are resolved. The last time we checked in on Winston, [he was] not answering a phone call from his estranged father, and in this season, you will see that individual — you will see my father. Winston handled it in only a way Winston could handle it.”

The episode with Winston’s dad is a special one for Morris, since he also happens to have directed it. “When you do see my father, it will be quite possibly the best episode of all TIME,” he assures us.

While Morris says he didn’t cry — “Now I’m a grown man, I don’t cry about anything,” he says — one unexpected member of the cast did cry — and often. “Jake Johnson [Nick Miller] cried a lot. I think he was the only one that was crying. He knew [that was] the last time he was gonna see me,” he jokes.

That’s likely not the case, as Morris says the group still texts and communicates weekly. In fact, it’s the camaraderie among his costars he’s going to miss most. “We’ve spent so much time with each other, we’ve become family at this point,” he says. For your job to be going to have fun with your favorite people in the world, that’s like a dream come true.”

What’s your favorite New Girl moment? Sound off over @BritandCo.