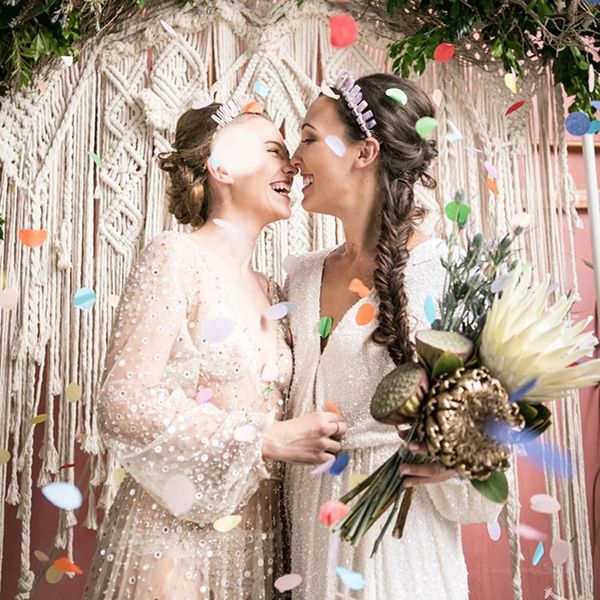 Despite marriage equality being legal in over 20 countries worldwide, there are still many infuriating hurdles that newly engaged LGBTQ+ couples must overcome when preparing for their big day. After getting engaged themselves, Aussie couple Tara Baker and Arlia Hassell were frustrated when every wedding magazine they came across solely featured heterosexual couples. As fierce advocates for diversity in media, Baker and Hassell were shocked that it was so hard to find LGBTQ+ representation in wedding publications. But instead of writing a letter to the editor and forgetting about it, they decided it was time to change the landscape themselves and began the process of creating their very own wedding magazine.

Both a print and online publication, Dancing With Her is one of the first magazines of its kind to provide content solely for lesbian and bisexual brides. Along with sharing the romantic stories of women across the globe, it’s also a platform that will help brides manage the ins and outs of their wedding planning journey and even find progressive wedding vendors in Australia and the US. We recently got the chance to chat with the co-founders of Dancing With Her about their new passion project, the exciting Australian marriage equality vote, and LGBTQ+ wedding misconceptions.

Just in case you missed this gorgeous editorial we share the other day 😍 @partywithlenzo sure know how to make wedding days a celebration 🎉 Captured by @kas.richards

Brit + Co: What inspired you to create Dancing With Her?

Tara Baker and Arlia Hassell: We were inspired by the lack of inspiration available to us on our own wedding planning journey. While there are some incredible resources for modern brides, we felt underrepresented within them as two women in love. We certainly quickly discovered an audience, one that extended across the world, that was looking for the very same thing that we were.

B+C: With Australia and many other countries around the world on the cusp of marriage equality, what was your goal in creating a queer women’s bridal magazine?

Happy Engagement Kymisha & Quanna! ❤ Did you know we share your engagement stories too?! Head over to the website & hit Submissions - we want to share you're love story 💕 Photography by @hunterandlight

B+C: Can you quickly give us a run-down of the recent postal survey on marriage equality that happened in Australia?

TB & AH: The last [month] has been a big one in Australia! Over the last few months, the LGBTQ+ community has been front and center of the marriage equality debate. It’s been an emotional time being subjected to the “No” campaign and some controversial conversations. However, the community came together, and on Wednesday the results were released with millions gathered to hear the results. Sixty-one percent of Australia voted YES, in favor of the Australian law changing, allowing two people of any gender or sexual orientation to marry. While it isn’t the end of the road, it’s a good place to start. We expect that the Australian government will go ahead and change the law before mid-December.

B+C: Along with bringing diversity to the industry through editorials and real stories, you are also passionate about connecting with wedding vendors and educating them on how to be inclusive. Can you talk about this a bit? Why was educating vendors important to your mission?

TB & AH: Tara has a background in sociology, and so making a difference within the wedding industry — to the people who are on the front line — is very important to us. We found that while vendors stated that they are supporters of marriage equality, [they still often had] a simple contact form asking for the bride’s and groom’s names — language that isn’t inclusive of a wider community. The same can be said for the lack of diversity that is shown within wedding media.

Equality extends well beyond a law changing. We want to see societal changes that are inclusive too. This means that we use different language, we don’t stereotype, and we ask more questions when we don’t understand.

We get to share this stunning shoot from the ever creative @mylittlepeonyau tonight ❤ And, I know, it should be all about the ladies, but little Finnley kinda steals the show 😍 Link is up in the bio & tap to see the creative team behind it all 💕 Photographed by @alanataylorphotography

B+C: What are some common misconceptions about same-sex weddings? Can you dispel a few for us?

TB & AH: Same-sex weddings are so diverse. We sometimes hear that same-sex weddings can’t be religious. They absolutely can! Many religions and religious leaders around the world celebrate love in all its representations.

Other times we hear that same-sex weddings can’t incorporate traditional aspects of a wedding day. They absolutely can! There might be some technicalities that need to be adjusted, such as who walks down the aisle first (and there are many ways to get yourself to the arbor!) and how couples navigate the tradition of changing last names after the big day.

These misconceptions don’t just apply to same-sex weddings: They apply to weddings of people of diverse sexualities, genders, and bodies — and there is no reason why they can’t apply to heterosexual newlyweds either.

How do you think the wedding industry can be more inclusive? Tweet us your ideas by mentioning @BritandCo.

Ashley Macey
Ashley Macey is a lifestyle freelance writer who loves all things fitness, wellness, and creativity. When she's not exploring her home in the Pacific Northwest with her dog Max, you'll probably find her curled up with a good book and some hot tea. Follow her daily jaunts on Twitter.
Entrepreneur
Wedding Planning and Decor
Entrepreneur Girlboss interview LGBTQ marriage Weddings
More From Wedding Planning and Decor