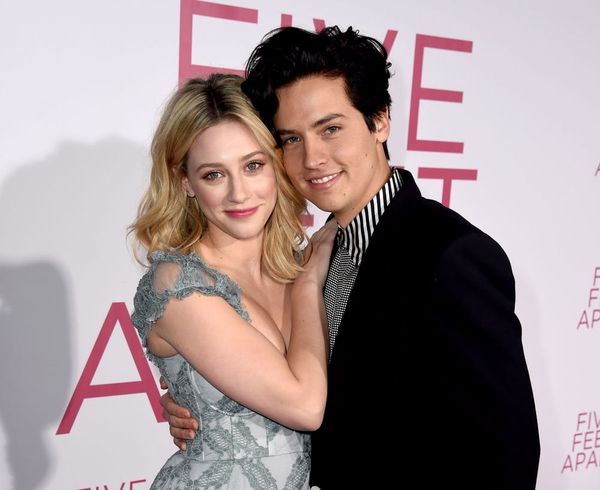 Lili Reinhart and Cole Sprouse have been reluctant to put their relationship in the spotlight, but in a rare red carpet appearance on Thursday, March 7, the Riverdale couple’s affection for each other was on full display.

Reinhart showed up to support Sprouse at the Los Angeles premiere of his tearjerker of a new movie, Five Feet Apart. The couple happily posed with their arms around each other, gazed into each other’s eyes, and even shared a kiss — a rare sight for the pair, who normally keep their relationship relatively private. And yes, it was intensely adorable.

The couple first sparked romance rumors in July 2017, a few months after their hit CW show premiered and had viewers shipping their characters, too. (Reinhart plays Betty Cooper, while Sprouse plays Jughead, so together, they’re known as Bughead.) In January 2018, they were spotted packing on the PDA during a beach vacation together, and a few months later, at the 2018 Met Gala, they made their official red carpet debut.

While the pair have dodged questions about their relationship in the media, they’ve recently become more open about sharing some of their sweetest moments together on social media, even posting loving tributes to one another on Valentine’s Day.

Sprouse and Reinhart celebrated the release of Five Feet Apart at the end of a heartbreaking week following Riverdale costar Luke Perry’s shocking death. Reinhart took to Twitter to share her devastation over the loss, while Sprouse shared a beautiful portrait of the late actor with a simple, “Love you bud.”