The Cutest, Funniest, Most Romantic Celebrity Valentine's Day Messages of 2019 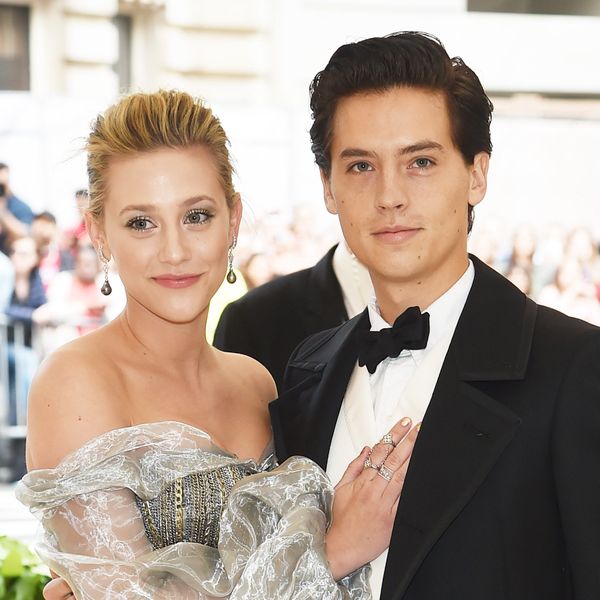 Whether you're celebrating Valentine's Day with your bae, your best girlfriends, or solo, there are lots of different ways to spread love. Some of our favorite celebs have shared a glimpse into their own celebrations on social media, with sweet, funny, and romantic notes to their significant others. Click through to see some of the best messages from Valentine's Day 2019. (Photos via Jason Kempin/Getty Images for LACMA + Jamie McCarthy/Getty Images + Gabriel Olsen/Getty Images + Dia Dipasupil/Getty Images)

Miley Cyrus: In a classic Miley move, the singer took to Instagram Stories to wish her husband, Liam Hemsworth, a happy Valentine's Day — with an NSFW meme of herself on full display during her 2014 Bangerz tour. She also posted several new photos from their low-key wedding. "Thank you for always bending down to hug me," she captioned one. "I promise I will always meet you in the middle on my tippiest toes! I love you Valentine!" (Photo via Dia Dipasupil/Getty Images)

Lili Reinhart and Cole Sprouse: The famously private couple engaged in some rare social media PDA on February 14, with Reinhart posting a photo of them looking lovingly into each other's eyes on a rooftop overlooking a cityscape. "You make me very happy. Happy Valentine's Day, my love," she captioned the pic. Sprouse responded in kind, sharing a recent portrait he had taken of the actress. "Quite actually the only thing keeping me sane is @lilireinhart," he wrote. (Photo via Jamie McCarthy/Getty Images)

Cindy Crawford: "Happy Valentine's Day to this hunk!" Crawford captioned a photo of a September 2000 magazine cover featuring her and husband Rande Gerber. "I still get excited to see you every morning and go to sleep with you every night. Glad you're mine." (Photo via Jason Kempin/Getty Images for LACMA)

Emma Bunton: The Spice Girls singer shared an adorable throwback photo of herself and her partner of 15 years, singer Jade Jones. "We've spent many a Valentine's Day together and they only get better," she wrote, tagging Jones in the caption. "I love you!"

Lena Waithe: The Emmy winner took to Instagram to share a black-and-white photo of her and her girlfriend, Alana Mayo. "Every day is the 14th," Waithe captioned the pic. (Photo via Alberto E. Rodriguez/Getty Images for MTV)

Nicole Kidman: The Big Little Lies actress used a line from Nat King Cole's song "Nature Boy" — a line also featured prominently in her 2001 movie Moulin Rouge — to send a message to her fans and husband Keith Urban. "The greatest thing you'll ever learn is just to love and be loved in return," she captioned a photo of her and Urban at the Golden Globes. "Happy #ValentinesDay, everyone." (Photo via Frazer Harrison/Getty Images)

Chance the Rapper: "Who gon sit at the merch table at your first shows and sell your raggedy t-shirts for you AND and model em online??? Who gon have yo back and yo front and yo side AND yo side??" Chance captioned a photo of his wife, Kirsten Corley. "I met my wife when I was Nine.. I had a hunch back then but I took my time. Happy Valentines my love." (Photo via Rob Kim/Getty Images)

Reese Witherspoon: The Legally Blonde 3 star wrote a sweet Instagram note to her valentine, Jim Toth, for "#9years of love and putting up with all my picture taking." (Photo via Christopher Polk/Getty Images for CCMA)

Sarah Hyland and Wells Adams: Hyland wrote a public love letter to Adams on Instagram, alongside a photo of them sitting on a cliff overlooking a forest. "With you I feel like I'm on top of the world & I'll always catch you if you fall... no matter how high we climb," she captioned the pic. "I love you to Pluto & back @wellsadams. I am so grateful and appreciative of everything you do for me." He returned the sentiment, writing on his own account, "Hey @sarahhyland, will you be my Valentine? I love you +1 more than anything you say." (Photo via Gabriel Olsen/Getty Images)

Hailey Baldwin: The model posted an artsy black-and-white picture of her and her new husband, Justin Bieber, making out on the beach, with a short but sweet caption to accompany it: "I get to be his valentine forevaaa evaaa????" (Photo via Mark R. Milan/GC Images)

Kim Kardashian and Kanye West: "Happy Valentines Day babe!!!" Kardashian wrote to her husband on Instagram, along with one photo of the couple sharing a kiss and another of them sharing a laugh. "I love you so much!" She later took to Twitter to share his super-extravagant gift to her: a private saxophone serenade in their living room — the floor of which was covered in individual roses in vases — by none other than Kenny G. "Best husband award goes to mine!!!!" she wrote. (Photo via Roy Rochlin/Getty Images)

Sam Claflin: The Me Before You actor posted a throwback photo with wife Laura Haddock, writing, "From the beginning... and until the end. I love you. Happy Valentines Day wifey." (Photo via Stuart C. Wilson/Getty Images for Paramount Pictures)

Barack and Michelle Obama: The former president and first lady shared notes to each other and their daughters via Instagram. "Happy Valentine's Day to the extraordinarily smart, beautiful, funny, one and only @MichelleObama," Barack wrote. "It's true; she does get down to Motown." The Becoming author, for her part, posted two photos with her husband and their kids, Sasha and Malia, which she captioned simply, "So lucky to call these three my valentines for all these years." (Photo via Chip Somodevilla/Getty Images)

Justin Timberlake and Jessica Biel: The singer posted a photo of himself hugging and kissing Biel from behind, which he captioned, "Valentine's ALL DAY, EVERY DAY since I found you." She shared a similar photo on her account, but of her kissing him. "I cherish those cheeks and everything else about you, baby," she wrote in the accompanying note. (Photo via Frazer Harrison/Getty Images)

Sophie Turner and Joe Jonas: The Game of Thrones actress addressed her fiancé directly in her Instagram caption for a photo of them under a tree in what looks like the middle of fall. "Happy Valentine's Day, my love," she wrote. "You make me the happiest." He, in turn, threw her a surprise early birthday bash. "My Valentine gets a surprise birthday party because she's the f*cking best," he captioned a series of photos from the party. (Photo via Andrew Toth/Getty Images for Republic Records)

Behati Prinsloo: The model posted a hilarious throwback photo of husband Adam Levine rocking a beanie, colored sunglasses, a tight orange top, and a soul patch. "May we never forget about this VIBE. His puka shell necklace was in the repair shop," she joked. "Yessssss this is my Valentine, always and forever. I love you @adamlevine." (Photo via Christopher Polk/Getty Images)