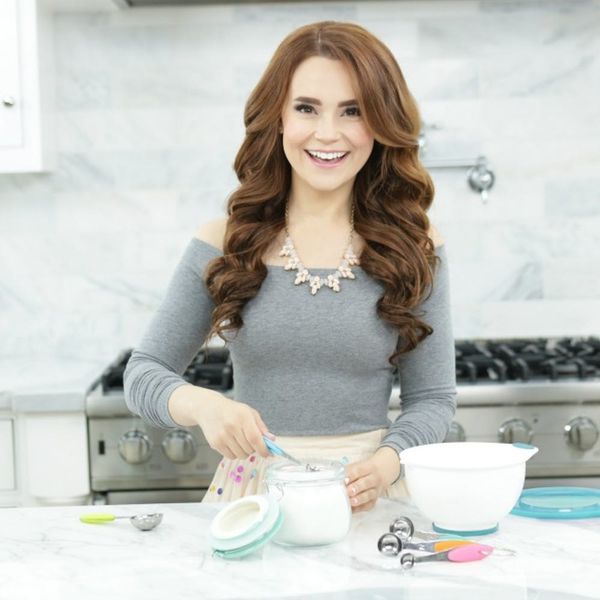 Unicorn rainbow poop cookies. Geode candy cake pops. A Pokémon Poke Ball cake. These aren’t the types of recipes you might see from the usual celebrity chefs, nor are they the classic baked goods you may have grown up eating. Instead, they’re the creations of millennial baking favorite Rosanna Pansino, star of the Nerdy Nummies franchise and YouTube vlogger whose cooking and baking videos have been watched more than two billion times.

Now, Pansino has her own line with Wilton, called Ro, which includes kitchen tools, sprinkle mixes, and decorating products for baking and candy making. And, yes, there’s even a mold in there to make poop-shaped desserts. For Pansino’s tips and more on her adorkable baked goods, keep scrolling.

On her beginnings in the kitchen:

Pansino, 32, began making her food videos in 2010, but her love of cooking started a lot earlier. “I first started baking when I was very young,” she told Brit + Co. “My grandmother would teach me the basics of baking, and with lots of practice, I slowly started to learn about decorating.”

On her favorite fandoms:

Even though there were thousands of baking videos already on YouTube, Pansino started her channel because she didn’t see any that specifically catered to the nerdy fandoms she was obsessed with.

Like most of us, one of her current obsessions is Game of Thrones. “I like to have big Game of Thrones viewing parties,” she told us. Her other current faves? “I recently visited The Wizarding World of Harry Potter at Universal Studios, and also just binge watched all of The 100.”

On why she loves making videos:

Pansino has written a cookbook (The Nerdy Nummies Cookbook), but video will always be her first love. “For me, I’ve always been a visual learner and wanted to make videos that fit that style,” she told us. “The most special videos are ones that I get to film with my dad. Baking was always something that brought our family together.”

On her essential kitchen tools:

When you start baking, it can be totally confusing, especially when it comes to getting the right equipment. But according to Pansino, sometimes simplest is best. “I would say the two most important tools to spruce up your cake are a set of decorating tips with decorating bags and an offset spatula to smooth out the icing,” she advised. Once you have those, the world is your oyster. Some of her most popular cakes have even been decorated with nothing more than a plastic bag for squeezing out icing, and different kinds of candy.

As for her new line of products with Wilton, her favorite pick is something a little more whimsical. “The item from the baking line that was the most fun to develop is the swirl-shaped Treat Mold,” Pansino said. “It can be used to make 3D poop-shaped food like brownies, cookies, cakes, chocolates and more.”

On her plans for the future:

Between her video channel, cookbook, and bakeware line, Pansino has a lot on her plate, but she’s still always looking to the future. “I absolutely love making videos on YouTube and don’t plan to stop. I had a lot of fun creating the baking line, my first cookbook, and even two 1-hour long television specials on the Food Network’s ‘Cooking Channel’. Continuing to try new projects is something I’d like to do more of in the future,” she said.

Justina Huddleston
Justina Huddleston is a food writer living in Los Angeles. When she's not busy writing, she spends her time in the kitchen creating both virtuous and decidedly junky vegan food. Buffalo chickpea pizza, anyone? She's also been known to eat a plain block of tofu or beans straight out of the can for lunch, but somehow those culinary adventures don't make it to her Instagram. You can follow Justina on Twitter or see what's cooking in her kitchen on her blog, A Life of Little Pleasures.
Dessert Recipes
Food Adulting
Dessert Recipes Foodie interview
The Conversation