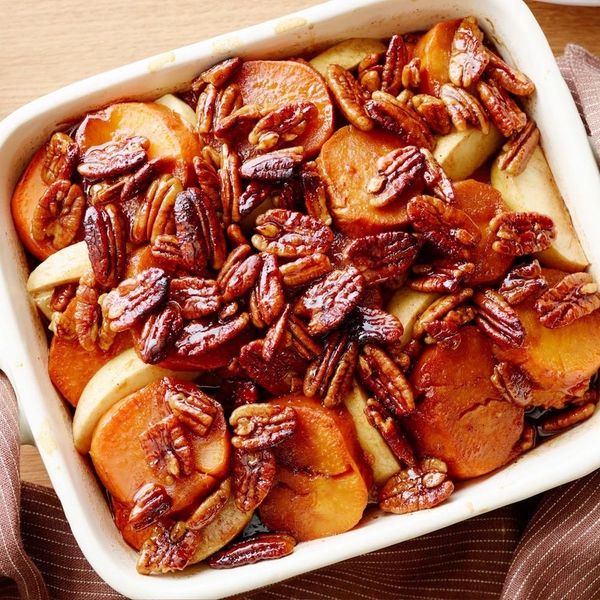 There are celebrities who cook, and then there are celebrity chefs. You know, the winners of Top Chef, the stars of Food Network, the food writers who’ve been given their own shows on the Travel Channel. If you’re a die-hard celebrity chef fan, no doubt you’ll want these pros’ advice for preparing Thanksgiving dinner. Lucky for you, they’re not shy about sharing their own favorite recipes. Here are 14 celebrity chef recipes to cover your entire Thanksgiving meal, from apps to dessert.

1. Giada de Laurentiis’ Butternut Squash and Goat Cheese Tartines: Giada may usually make Italian fare, but she loves a good traditional American Thanksgiving. These tartines are just the right size for munching on before the big dinner. (via Popsugar)

2. Tyler Florence’s Old-Fashioned Pimiento Cheese With Crackers and Crudités: In case you weren’t aware, crudités is simply a French term for fresh vegetables. Surround this flavorful cheese appetizer with your choice of gourmet crackers and veggies to tide your guests over before dinner is served. (via Delish)

3. Mario Batali’s Mixed Vegetable and Farro Soup: This vegan soup is warming and hearty, making for a perfect first course on your dinner menu. As a bonus, it’s hearty enough to be a main course for any vegans or vegetarians in your group. (via Food and Wine)

4. Alton Brown’s Honey Brined Smoked Turkey: Celeb chef Alton Brown recommends brining your turkey in a mixture of salt, honey and vegetable broth for about 12 hours before smoking it on the grill. Your turkey will have an AMAZING flavor and texture unrivaled by your friends’ boring oven-roasted turkeys. (via Food Network)

5. Andrew Zimmern’s Perfect Thanksgiving Turkey, Stuffing and Gravy: Looking for something slightly more traditional? This recipe by Andrew Zimmern recommends roasting your turkey in classic fashion. Pro tip: Try poaching the back of the bird in a shallow pot of boiling water prior to roasting, as this part of the turkey (the dark meat portion) takes slightly longer to cook than the white meat areas. (via Andrew Zimmern)

6. Ina Garten’s Roast Turkey and Gravy With Onions and Sage: When in doubt, ask yourself WWTBCD? (“What would the Barefoot Contessa do?” as Gilmore Girls revival fans probably know already.) In this recipe, Ina Garten recommends preparing your turkey with the herbaceous flavor of sage, along with fresh thyme, onion and brandy. (via Food Network)

7. Anthony Bourdain’s Candied Sweet Potatoes With Bourbon: While it may be surprising that the wonderfully seedy chef and travel writer Anthony Bourdain serves something as traditional as candied sweet potatoes at his Thanksgiving spread, it’s not surprising at all that they’re served with bourbon. Make Tony proud and sip some on the side while you prepare this delicious dish. (via Food and Wine)

8. Rachel Ray’s Apple and Onion Stuffin’ for a Stuffin’ Loaf or Muffins: The name of this recipe is admittedly a bit of a mouthful, but you’ll want to shovel mouthfuls of this goodness into your belly. Bonus: You can make this into either one loaf or individual muffins, depending on what suits your fancy. (via Delish)

10. Melissa d’Arabian’s Buttermilk Mashed Potatoes: Arguably the most important part of Thanksgiving (minus the turkey, we suppose), mashed potatoes should be creamy, thick and hearty… and that’s exactly how Food Network star Melissa d’Arabian makes them with this recipe. Major bonus: They’ll be ready to go in less than 30 minutes! (via Delish)

12. Aaron Sanchez’s Chorizo and Corn Bread Stuffing: Spice things up this Thanksgiving with this drool-worthy chorizo and corn bread stuffing. It’s loaded with flavor and spice, featuring not only chorizo but also onion, garlic, cilantro, cornbread and chicken stock. (via Delish)

13. Bobby Flay’s Pumpkin Pie With Cinnamon Crunch and Bourbon-Maple Whipped Cream: Take your pumpkin pie up a notch this year with the flavors of rich bourbon, sweet maple and spicy cinnamon. Your graham cracker crust will be the icing on the cake. (Well, it’ll technically be the crust, but you know…) (via Food Network)

14. Paula Deen’s Mom’s Apple Pie: Leave it to Paula Deen to concoct the most down-home, traditional dish on this list: good ol’ apple pie. You’ll *only* need two sticks of butter to make this delicious dessert too. (via Paula Deen)

Maggie McCracken
Maggie McCracken is a freelance writer, blogger and aspiring digital nomad. She writes primarily about food, travel, yoga and healthy living, and she has a background in health and science journalism. You can read more of her work on her lifestyle and travel blog, The Olive Branch.
Thanksgiving Recipes
Celebrity News
Thanksgiving Recipes
More From Celebrity News