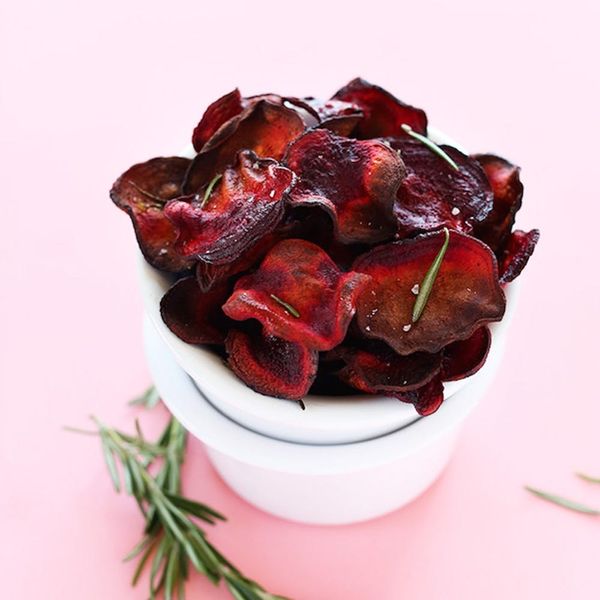 There’s something *so* addicting about the crunch of a potato chip. Why else would something like a potato chip brownie even exist? They’re salty, sometimes sweet and always finger lickin’ good. Much to our dismay, they’re not the healthiest snack option out there, which is why homemade fruit and veggie chips are essential. If you’re looking to curb that craving without sacrificing flavor and crunch, take a look at the 13 healthy baked alternatives below.

The first step to weaning yourself off of potato chips is trying their healthier cousin, sweet potatoes. They’re full of beta-carotene, vitamin C, manganese, copper, and vitamin B6 and have a delicious subtle sweetness. (via Wellness)

Once you pop the first of these crispy caramelized bananas, you won’t be able to stop. At least they’ll do double duty by easing the need for something crunchy and something sweet. (via Diethood)

Radishes deserve a prime position on your crudité platter, especially when they’re a chip version. (via A Zesty Bite)

You’ve likely had apple chips at some point in your life but, chances are, they were fried. Baking them will save you a ton of calories, so you can feel better about dipping them in caramel sauce. (via Sweet Like Cocoa)

You read that right — even water-packed cucumbers can be turned into chips. The key to achieving perfection is using an English cucumber, which doesn’t have to be peeled or seeded. (via The Crunchy Chronicles)

Even if you’re not the world’s biggest beet fan, you *need* to try these chips. The rosemary adds a fragrant earthiness that highlights the best qualities of the root veggie. (via Minimalist Baker)

These may look like blue corn tortilla chips, but they’re most definitely not. Imagine your morning green smoothie turned into a chip, and this is what you get! (via Rachel Cooks)

Carrots are fabulous because they can easily take on savory and sweet flavors. If you can’t decide which way to go, separate the batch in half and make one of each. (via A Spicy Perspective)

If you’re a chip aficionado, you’ve probably had store-bought plantain chips. Delish, right? Now, you can save some moolah and make your own at home in just 10 minutes. (via Paleo Gluten Free Eats)

Not only do these parsnip chips look like potatoes, but they have a similar flavor as well. Try swapping these for your kid’s usual afternoon snack and they’ll never know the difference. (via Food Fanatic)

If an apple can be given the chip treatment, you better believe a pear can too. To get the best chips, go for ones that are still slightly green and underripe so they keep their shape. (via Beyond the Chicken Coop)

Mmmm, salt and vinegar… since you could easily polish off a whole bag of the potato chips, you have to try this guilt-free crispy kale version. (via Gimme Some Oven)

The thinner the chip, the crisper the bite. If homemade chip making is in your future, invest in a good mandoline for safe and uniform slices of your zucchini and other fruits and veggies. (via Table for Two)
Paige Johnson
Paige is a blogger, food writer and culinary master from Louisville, Ky. She's a newlywed who's obsessed with dogs and renovating her 117 year old home. When she's not working on her blog — My Modern Cookery — you can find her binge watching F.R.I.E.N.D.S with a triple shot latte in-hand.
recipe roundup
Healthy Eating
recipe roundup Snacks
The Conversation