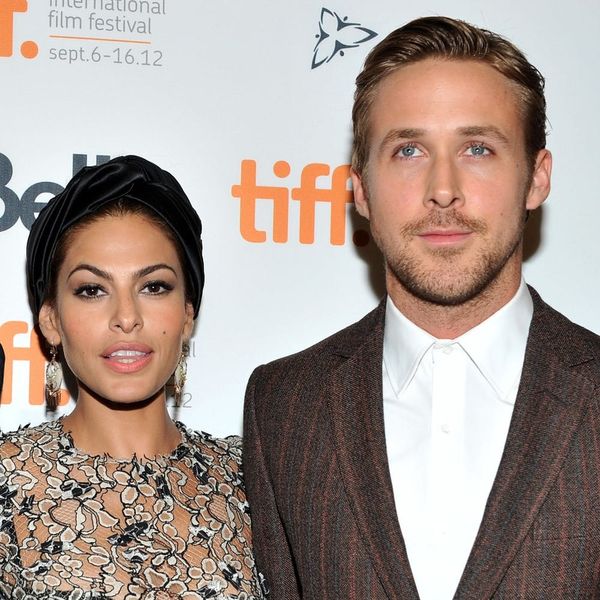 Relationships are tough no matter what, but in Hollywood, they can be near impossible. Despite the spotlight, however, there are couples that have not only survived but thrived together, and many of them didn’t require a marriage certificate. Here are nine couples that didn’t have to put a ring on it to prove their love is real.

1. Eva Mendes and Ryan Gosling: Actress Mendes and Oscar nominee Gosling first met while filming the 2012 drama, The Place Beyond the Pines, where they played parents. The now real-life parents have two daughters, Amada and Esmeralda, but never tied the knot. When Gosling won a Golden Globe for La La Land earlier this year, he melted hearts everywhere thanking his “lady” in his acceptance speech. And Mendes has previously called the idea of marriage archaic, saying “I actually think it’s really sexy to be with someone in your 50s and 60s and be like, ‘That’s my boyfriend.'” Hey, girl, we’d be okay with that too. (Photo via Sonia Recchia/Getty)

2. Goldie Hawn and Kurt Russell: Hawn and Russell first met on the set of the 1968 film The One and Only, Genuine, Original Family Band (when they were 21 and 16, respectively), but romance didn’t blossom until they were both cast in the film, Swing Shift. Now going on 34 years together, the two have a blended family that includes her children Kate and Oliver Hudson (from her previous marriage to Bill Hudson), his son Boston (from his previous marriage to Season Hubley), and their one son together, Wyatt. Hudson actually credits not getting married as the secret to their long-term success, saying it “gives you the freedom to make decisions one way or the other. So for me, I chose to stay, Kurt chose to stay, and we like the choice.” We like the choice too. (Photo via Steve Granitz/Getty)

3. Oprah Winfrey and Stedman Graham: The media mogul and her businessman beau have been together since 1986; the two were engaged in 1992 but never followed through with the nuptials. When friends started calling her to inquire why they weren’t invited to her alleged wedding last year, Winfrey immediately shot down the rumors saying “It isn’t true!” Winfrey also previously said she didn’t want to get married “because I could not have the life that I created for myself.” As one of the most influential women in the world, she’s won at life and love. (Photo via Steve Granitz/Getty)

4. Kourtney Kardashian and Scott Disick: The couple has been on-again, off-again for nine years and survived a stint in rehab (for him), multiple reality shows, and three kids (Mason, Penelope, and Reign). One thing they have never done — get married. Most recently, it was reported that Kardashian turned down Disick’s marriage proposal on a family trip to Costa Rica, but it’s hard to keep up with these particular Kardashians. (Photo via David Becker/Getty)

5. Jennifer Hudson and David Otunga: Former American Idol and Oscar winner Hudson and WWE wrestler Otunga have been engaged since 2008 and are parents to a seven-year-old son, David Daniel Otunga, Jr. But braving the Idol judges has more than prepared her for the pressures of marital expectations. In an interview on ITV’s Loose Women, Hudson said “I’m here because I wanna be. I’m not here because I have to be.” You tell ’em. (Photo via Jason LaVeris/Getty)

6. Jane Fallon and Ricky Gervais: Producer and best-selling author Fallon and comedian/actor Gervais met in 1982 at University College London and have been together every since. The couple has stated they do not want to get married or have kids. Gervais once joked to David Letterman that there was no point for them to get married because “we don’t want any more toasters; we never want our families to meet, that’d be terrible.” (Photo via Ben Gabbe/Getty)

7. Anna Kournikova and Enrique Iglesias: Former tennis star Kournikova and Latin crooner Iglesias, who met on the set of his 2004 “Escape” video, have been famously private about their personal lives. Despite marriage rumors throughout the years, the two have remained tight-lipped on their relationship, with Iglesias telling E! Online that “I don’t believe you need a piece of paper to show you love someone.” Hero. (Photo via John Parra/Getty)

8. Maya Rudolph and Paul Thomas Anderson: Funny woman Rudolph and her six-time Oscar-nominated director partner Anderson have been together since 2001. The two have four children (Pearl Bailey, Lucille, Minnie Ida, and Jack), so who really has time to plan a wedding? (Photo via Kevin Mazur/Getty)

9. Shakira and Gerard Piqué: The Colombian singer and the Spanish footballer met filming the music video for “Waka Waka,” the official World Cup song in 2010. Piqué struck up some flirty banter with Shakira by asking her about… the weather. It worked, and the couple now has two boys, Sasha and Milan. During a press conference last year, Shakira said, “We’re very happy the way we are, and for now there are no plans for marriage.” Hips don’t lie, and neither does love. (Photo via Europa Press/Getty)

What’s your favorite never-married couple? Share with us @BritandCo!