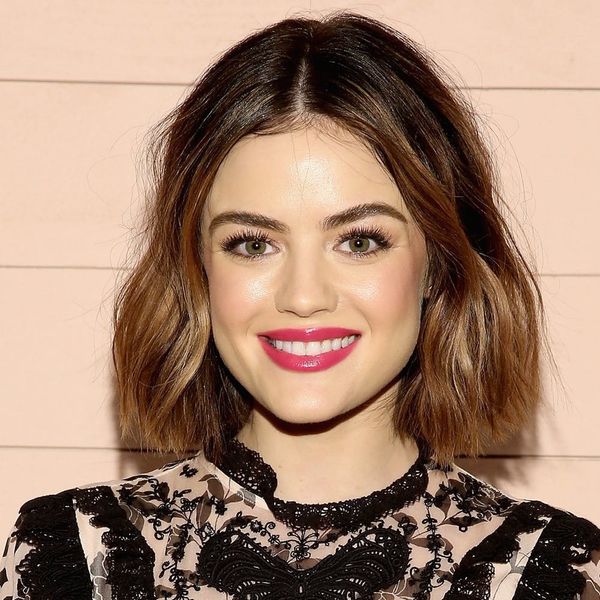 Though she’s known for her signature brunette hue, Lucy Hale loves changing things up when it comes to her hair. Most recently, Hale had us doing a double take as she debuted her newly blonde locks.

The Truth or Dare star showed off a brand-new blonde shade on Instagram, revealing that her longtime stylist Kristin Ess gave her the warm, caramel look. In recent weeks, Hale had gradually been going lighter, adding sunkissed ombré ends to her chin-length bob, but she took the plunge to full-on blonde, adding warmth and brightness to her complexion.

The change-up shouldn’t come as much of a surprise to fans, though, because the Pretty Little Liars alum said she was thinking about going blonde back in January. Hale told People she was inspired by fellow famous brunette Selena Gomez, who briefly went blonde, shocking pretty much everyone last fall.

Discussing an upcoming trip to her stylist, Hale teased, “I’m getting my hair done in like a week, and I don’t know what I’m going to do but it will probably be something drastic because I don’t have to film for a little bit. I could be coming out with a different color. I have to do something different because I get so bored.”

I dye. 👸🏼 thank you @kristin_ess for temporarily making me the blonde alter ego I've always wanted to be.

She added, “I saw Selena [go blonde] and she looked so good. I was like ‘Yes!’ That was good inspiration. When it comes to beauty, I would try anything.”

Hale has gone lighter in the past. In 2016, she went similarly caramel before adding pops of platinum, flawlessly pulling off every hue she tries.

going blonder by the minute with @lucyhale and her #PopsOfPlatinum

Nothing like the start of a new season for the best hair color inspo.

What do you think about Lucy Hale’s new blonde look? Let us know @BritandCo.

Arielle Tschinkel
Arielle Tschinkel is a pop culture junkie who went to NYU because the Olsen twins went to NYU (really). She is a freelance writer whose work has also been featured on HelloGiggles, Refinery29, SheKnows, Bustle, Hollywood.com, and many others; and she's living her dream one Britney Spears GIF at a time. Follow her on Twitter @mrstschinkel or visit her website at arielletschinkel.com.
Celebrity Hair
Hair
Celebrity Hair Hair Dye