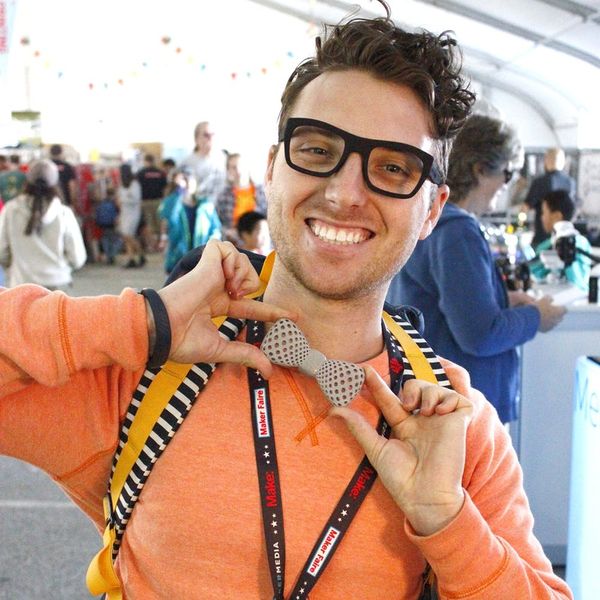 The Met Gala, any/all MTV award shows, Cannes red carpet, the Maker Faire. While we’d gladly sidle up for a front row seat at any event on that list, the latter is luckily only a CalTrain ride away from Brit HQ and we got a chance to check out a preview of this year’s two-day event (today + tomorrow, y’all!) on Friday. From giant cupcakes on wheels to smart bikes, neon forests to sewing machines that draw and 3D everything, Maker Faire is a must-visit if you’re in the Bay Area. Here are a *few of our favorite things* from the Greatest Show + Tell on Earth:

13 year-old Saurabh Narain Rubik’s Cube Solving Robot: This teenager created a robot with his already insane engineering skills that can solve any Rubik’s Cube. The best part was that he raced the robot to show who was faster at solving it — and he was. As a side note, I’ve never been able to solve one. So, Robot: 1 Saurabh: 1 Sean: 0

Makey Makey: At first I walked past this one thinking it was kind of a silly joke but then Lisa and Cortney stopped to check it out and I’m glad they did. It’s a kit with alligator clips and a USB for you to invent your own sounds with electrical things around you (which, you’ll find out, happen to be everything). It was really interesting to showcase how everything conducts electricity as we used bananas, grass, a tabletop water fountain and more as musical instruments. Kind of creepy, yet enjoyable all at once.

ShopBot: As a man who uses the garage as a workspace for creating, my dad would love this company of CNC Tools (though obviously it appeals to more people than just my father ;) Acting in a similar way to a laser cutter, this tool can help you create anything you want by cutting, drilling and carving on any surface.

Shaper: This one fuses handheld power tools and computers to make anyone a pro in the workshop. Take a picture of your workspace design using smart tape then retrace it with the smart cutter and you’ll be able to take on complicated-seeming wood working projects that are actually a matter of staying inside the lines.

DIWire: D I Wire… get it, DIYers ;) We loved this desktop wire bender because of the name (and because we got devil horns, cat ear and bunny ear headbands) but also because it is a fun little machine. Bend wire into any shape or size you want — a wall clock, a simple heart for a necklace, even legs for a coffee table. This tool is rewiring the wire game.

Intel’s Denny Bike: I thought this smart bike (with a little motor that helps you scale hills — looking at you, SF) looked super sleek and gorgeous and had a price point not as crazy ridiculous as I thought it would be. I was impressed with the splash guards on the tires, the back light for visibility and turn signals, the matte finish, the charging pod to take into the office to charge during the day and how the handlebars act as a smart lock. I’ll be excited to see if it changes by the time it hits the market and how it will compare to the current smart bikes out there now.

Fabricate My Life: I admit it, I’m a budding 3D printing geek. After taking a couple classes at Brit + Co and printing wedding favors for a friends’ nuptials, I’ve been bitten by the bug that is this emerging creative outlet. If you’re hip to the 3D scene, you need to check out the faire’s Make:Labs where you can go hands-on with printers, laser cutters, CNC machines and all sorts of gadgets you wouldn’t have dreamt seeing on a desktop a few years ago. I reaffirmed my love of itty bitty printer Cube and got to try out Flux, a printer that can do it ALL. It 3D prints, will eventually be able to make food and can draw or etch with different attachments. GENIUS!

Glass Blowing + Fusing: I grew up in Upstate, NY near Corning, where THE CORNING MUSEUM OF GLASS (!!) is located. This trip down memoir lane is to tell you that I’ve seen some glass blowing in my day, but it’s been awhile — that is, until Maker Faire. Check out the glass blowers and glass artisans in Maker Faire’s Homegrown Village. I’m totally pitching a class at Bullseye Glass Resource Center for Brit + Co’s next Creativity Day.

Dos Pueblos High School’s Engineering Academy: The three of us were wildly impressed by the group of high school students from Dos Pueblos High, who crafted the coolest science project we’ve ever seen. The photo above shows what happens when MarbleWorks meets physics. I would tell you more about what this was and did but I would not be doing it justice and this sweet girl would read this and be like, oh she does not get it. As Sean put it “I was impressed and also intimidated by their brains.”

Also cool to note — the school’s engineering program has TRIPLED in size (from around 30 to 100) this year with that many more kids turning to STEAM studies. What up, future, you’re looking reeeal bright.

Crazy Cool Toys for Kids: Ugh! Speaking of smart kids — it blows my mind to think about the children of tomorrow and how they will probably look at the toys we played with and be like, “Oh, so Tinker Toys were basically a beta version of what we play with now?” (And I’ll be like, “um, kinda.”) Roominate, a startup recently featured on Shark Tank is a building toy aimed at girls that makes working circuits look more fun than Polly Pocket, while MakerBloks (pictured above) is LEGO 2.0. These reactive building blocks come with their very own tablet game to introduce your little ones to the world of electronics on and off a screen. They just killed their goal on Kickstarter with 30 days still left to pledge.

Pley: This was a group favorite, like Le Tote (my fave!) or Netflix for LEGOs, you get a box of the blocks and a new project to build each month. Keep any you want or return them for your next set. While this makes sense for the kids, I have a couple friends’ husbands in mind who would love this for themselves.

The Dark Room: Walking around the Maker Faire already kind of felt like you were in a foreign land. But once you headed into the “Dark Room” it really felt like we left planet Earth for a techy, Tron-ish kind of wonderland. We saw a multicolored light-up forest, a slew of neon signs (including one that randomly spelled out “Maya Rudolph”) and a Lyft car tricked out with LEDs that synced with the stereo.

Oru Kayak: If you’ve been interested in kayaking but deterred from picking up the hobby because of the hefty equipment, this invention solves all your problems. The Oru kayak only weighs 26 pounds and can be folded up in just a couple minutes and carried on your shoulder.

Mono Rover: I had been seeing these around for about a year now, but seeing one up close and in action was super cool. While the dudes I’ve spotted zooming around on the street make them look like an easy mode of transport, the folks giving this techy version of the unicycle a whirl proved that it is in fact a skill to be learned.

HP Sprout: We have one of these bad boys in the Brit + Co office, but all three of us Maker Faire attendees hadn’t gotten our hands dirty with it yet. Besides the origami stations, a nice rep showed us how the Sprout 3D scans and prepares a file for printing just from placing an object in front of the screen.

Lumen Electronic Jewelry: We saw our share of 3D printed accessories at this year’s Maker Faire, but this was an interesting take on the science-meets-fashion intersection. Lumen’s electronic jewelry is solar powered, so as long as you wear these earrings during the day, they’ll always light up at night.

Stop by the Bay Area Maker Faire Sunday, May 17 and say hi to our founder Brit Morin, who is giving a talk on The Future of the HomeMAKER at 10:30am in the Meeting Pavilion: Center Stage!

Are you hitting up Maker Faire this weekend or in another city this year? Share your favorite thing below!

Lisa Raphael
In her past professional lives, Lisa has served the masses as the Editorial Director at Brit + Co, Bieber Whisperer at J-14, Golden Girls Fan Club Prez at Lifetime and Talk Show Host Understudy to Katie Couric. Now, she's taking on the sports world at The Relish, teaching Hairography 101 in her spare time and will forever be trying to fill the hole Zayn Malik left in her heart.
3D printing
Tech
3D printing
More From Tech