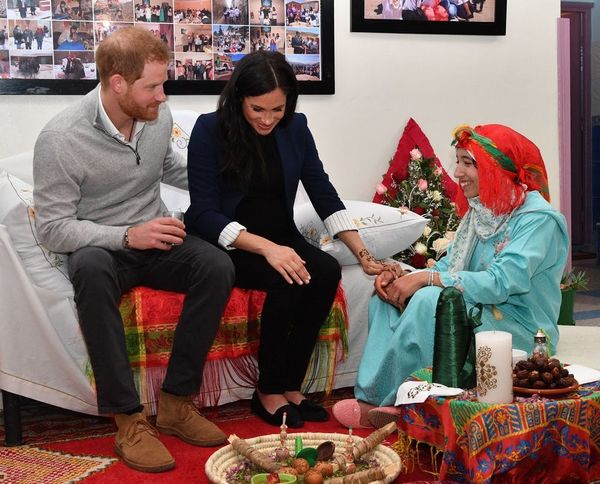 Meghan Markle is on the move… again! Days after returning home to London following a glamorous baby shower in NYC, the Duchess of Sussex has embarked on her last pre-baby trip. The mom-to-be and her husband, Prince Harry, are currently on a three-day visit to Morocco, which kicked off on Saturday, February 23.

The parents-to-be landed in Casablanca and were met by the British Ambassador to Morocco, Thomas Reilly, and his wife, Alix, People reports. They were then introduced to The Crown Prince of Morocco, Prince Moulay Hassan, before setting off on a tour of the country to “see work being done to promote girl’s education, empower young people, and support children from disadvantaged backgrounds,” Kensington Palace explained on Twitter.

Markle kicked off the three-day visit in a stunning red Valentino cape dress, which she paired with a nude blush Valentino clutch, gloves, and matching heels. According to People, she chose the bright red color as a nod to the Moroccan flag’s red background, which stands for hardiness, bravery, strength, and valor.

Early the next morning, the royals headed off to the remote Atlas Mountains to visit one of five Education For All boarding houses. Markle traded in her fabulous frock for skinny black jeans and a tailored navy blazer, and swapped her high heels for some comfy black flats.

As Kensington Palace revealed on Twitter, the boarding house they visited “enables girls from rural areas to live nearer their school so they can continue their education.” While there, the couple were greeted with a welcome song, chatted with some of the girls, dropped in on a classroom studying for exams, and stopped by the dorm rooms.

Then it was off to the school next door, the Lycée Collegial Le Grand Atlas, where they listened to students practicing English and watched them play a football match. What’s more, the beaming duchess took part in a Henna ceremony while in the village of Asni, “which is a Moroccan tradition for pregnant women,” the Palace tweeted.

Last but not least, the Duchess did a quick outfit change, changing her black shirt for a white tunic and slipping on some black slingback pumps to watch the Duke of Sussex present the founder of Education for All, Michael McHugo, with the Member of the Order of the British Empire (MBE) honor. “It is with great pleasure that on Her Majesty’s behalf, I present you with the badge of honor,” Prince Harry said. “May I congratulate you on all the work you have done to improve gender equality.”

What do you think of Meghan Markle’s Moroccan style? Tweet us @BritandCo.