Melania Trump Just Wore Her Most Severe, Military-Inspired Look Yet 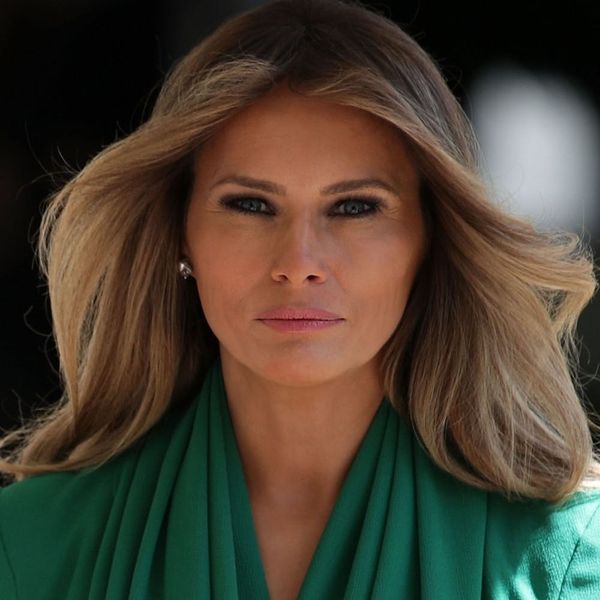 When it comes to fashion, Melania Trump’s looks have been heavily dissected in the media. In the 99 days she’s been our nation’s First Lady, she’s clearly established she’s a fan of classic looks with clean lines, whether she’s in a $2,400 LBD or a non-traditional inauguration gown. The getup she wore to welcome Argentinian President Mauricio Macri and wife Juliana Awanda, however, struck a different chord entirely.

In greeting the duo, the 47-year-old chose a khaki green Altuzarra Asymmetric Drill Skirt ($1,075) and matching Feday Cord-Trim Drill Jacket ($2,695) that had a strong military feel to it. Trump also added an unexpected touch of flair with the addition of some Manolo Blahnik BB Watersnake pumps (sold out) and her infamous 25 carat Graff diamond ring (pictured in her official White House portrait).

Meanwhile, the Argentinian first lady went a softer route with a red Alexander McQueen frock, a pair of $695 Aquazzura heels, and a crimson clutch. (Folks were quick to note that while Awada’s outfit sent less of an overt message, her shoe designer is currently locked in a lawsuit against Ivanka Trump, suing the First Daughter’s eponymous brand for copyright infringement. Significant? Maybe, maybe not.)

The First Lady’s military-inspired look comes at a time of high tension with North Korea, with the President proclaiming that the US could be on the verge of a “major, major conflict.”

After all, it certainly wouldn’t be the first time the First Lady has used her clothing as a form of expression: Just two weeks prior, she donned a bright red Valentino midi dress, a color of good luck and celebration in China, to meet with the Chinese President.

Do you think Melania was sending a message with her outfit choice? Let us know over @BritandCo.

Nicole Briese
Nicole is the weekend editor for Brit + Co who loves bringing you all the latest buzz. When she's not busy typing away into the wee hours, you can usually find her canoodling with her fur babies, rooting around in a bookstore, or rocking out at a concert of some sort (Guns N' Roses forever!). Check out all her latest musings and past work at nicolebjean.com.
Politics
Celeb Style
Politics