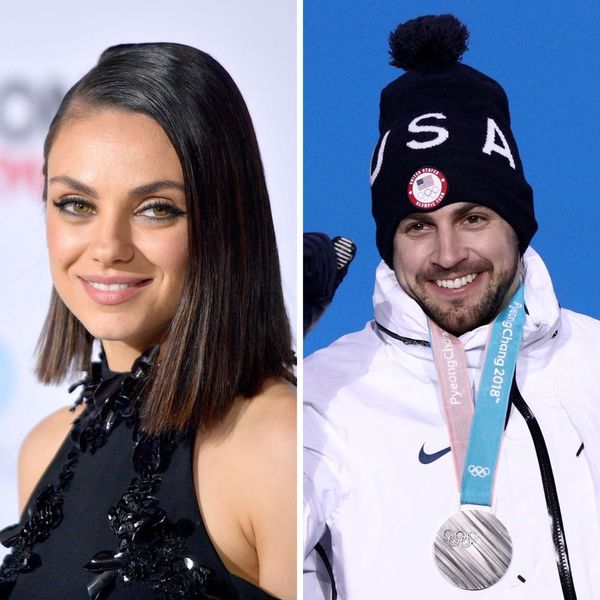 We couldn’t help but smile when Sally Field used Twitter to try to hook up her son with Olympic figure skater Adam Rippon. And now we’re grinning again over the surprise message that Mila Kunis sent to silver-medal winner Chris Mazdzer.

When the 29-year-old sat down for an interview on Tuesday’s Megyn Kelly Today, he was wearing the medal he earned during the men’s singles luge event in PyeongChang, which is a first for the US. Among the people celebrating Mazdzer’s accomplishment was Mila Kunis, who sent the athlete a special message through the show.

“Hey, Chris, it’s Mila. Congratulations on your medal,” the actress said. “Welcome home. I hope you had a great time and you kicked a**.”

When someone off-camera — Kelly speculated that it may have been Kunis’ husband, Ashton Kutcher — suggested that she used a word that might not be TV-friendly, she responded with another, er, colorful word.

Mazdzer didn’t seem to mind the language, saying, “That’s one of my favorite phrases.” He then added that the surprise was “out of this world.”

We can believe that, since the medalist confessed to Us Weekly that the Black Swan star is his celebrity crush. At the time, however, he was still seeking an introduction. “We just do this sport called luge, so if you could help us, that’d be awesome!” he joked to the mag.

He may not have gotten the chance to meet his celebrity crush face-to-face quite yet, but it looks like he was pretty thrilled with his video surprise.

Who is your celeb crush? Let us know @BritandCo!

Desiree O
Desirée O is a ‘Professional Bohemian’ who loves anything and everything related to the arts, entertainment, and pop culture. She ADORES being a ‘Newsy’ for Brit + Co, covering all of the latest tidbits of awesomeness that you want to read about. When she’s not writing, she’s either making messy art, going on long adventurous walks with her camera, or poking around over at bohemianizm (http://www.bohemianizm.com/). You can find out about Desirée O and her work at http://DesireeO.com/ or follow her on Twitter @DesireeO.
Olympics
Pop Culture
Olympics