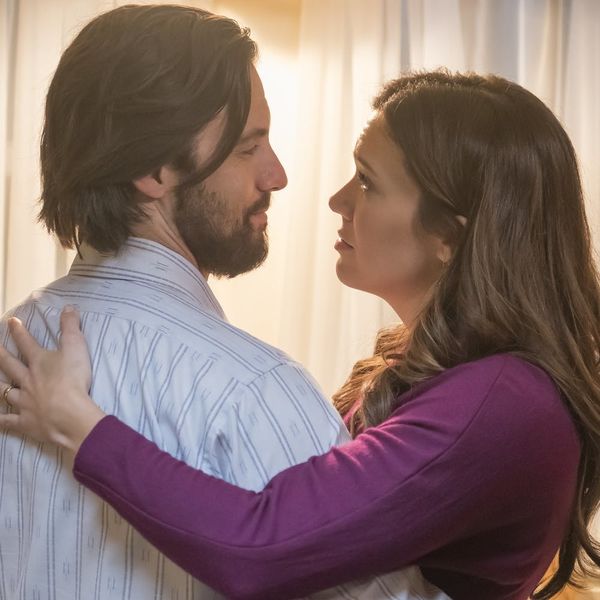 The cast of NBC’s This Is Us are as close off-screen as they are on. Not only do they have a Pearson family group text, but they’re also super supportive of one another’s partners and stand in solidarity with each other no matter what. Now, Milo Ventimiglia (AKA Jack Pearson) is admitting that he even supports the story lines on the show that are tough for fans to watch — namely, the relationship between his on-screen wife and best friend.

“I’m all for it,” he recently told Us Weekly. If you’re not familiar with the show, it depicts various timelines throughout the Pearson family’s life. In the present-day timeline, Jack is dead, and his wife, Rebecca (Mandy Moore), is partnered up with Jack’s longtime best friend, Miguel (Jon Huertas).

“People always sort of raise an eyebrow when they ask me about that,” Ventimiglia continued. “It’s like one of my best friends says, ‘Hey, if anything happens to me, make sure my family is okay.’ I feel like Jack and Miguel were very close friends. Understandably, I feel like there is a duty of friendship.”

SQUAD 💯. Jack and Rebecca are getting married tonight and EVERYONE is invited!! 9/8c on NBC ❤️🕊💍. #ThisIsUs pic.twitter.com/t40uGJXcAi

The relationship reveal was made way back in the second episode of the first season, and fans were shook. From the very beginning, Jack and Rebecca were the ultimate in couple goals; it wasn’t until the rest of the season unfolded that viewers realized Jack was no longer alive in the present-day Pearson timeline — and that maybe Rebecca and Miguel’s union made more sense than many were willing to admit.

Ventimiglia added that even if he doesn’t get to be in every scene with his on-screen wife anymore, when he does, it’s pure magic. “I feel loved as Jack,” he shared. “She’s the best scene partner you could ever hope to have.” Lucky Miguel!

What are your current feelings on Rebecca and Miguel’s relationship? Let us know @BritandCo!