Meet the Next Female NASA Astronauts Looking to Conquer the Universe 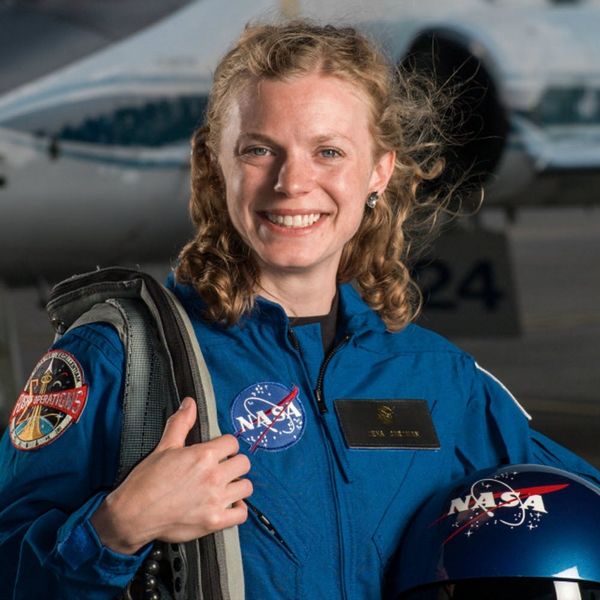 From the incredible women who inspired Hidden Figures to Jeanette J. Epps, the first African-American astronaut to embark on a mission to the International Space Station, NASA has employed many remarkable women throughout the decades. Coming off the heels of the 2013 NASA Astronaut Candidate Class (which was the first class to have an equal number of men and women), NASA recently announced the members of its 2017 class, which includes five women and seven men who are looking to make their mark on the Space Program, potentially in time for the first human voyage to Mars in the 2030s.

With over 40 percent of girls ages 1-10 considering a career in STEM, according to a 2015 study, we think it’s awesome that young girls are getting to see tangible examples of what badassery in science really looks like. Take astronaut Peggy Whitson, for example, who in April of this year beat the record for the longest cumulative time spent in space (and BTW, she was also the first woman to command the International Space Station — twice).

So before these newly minted space-goers head to the Johnson Space Center in Houston to undergo an intense two-year training and evaluation program, here’s an inside look at NASA’s next five talented female astronauts looking to conquer the universe.

1. Kayla Barron: This Washington native didn’t always dream of becoming an astronaut. In fact, after graduating from the US Naval Academy with a Bachelor’s degree in Systems Engineering and later earning a Master’s Degree in Nuclear Engineering from the University of Cambridge, she decided to pursue a gig as a Submarine Warfare Officer (she was actually a member of the first class of women who was commissioned into the submarine community). After toying with the idea of applying to NASA for a few weeks, she had the lightbulb moment she needed to ambitiously pursue the opportunity after talking to her boss, Vice Admiral Ted Carter, who asked her if she knew how someone becomes an astronaut. When she said she didn’t, he responded bluntly: You apply. “It was the obvious answer; that I should go for it and put my name out there, and I wouldn’t be here if hadn’t,” Kayla says in an interview with Fortune. After all, “the depths of the ocean are not that different from the vacuum of space,” according to this marine and universe explorer.

2. Zena Cardman: When Zena Cardman first got the news that she would be one of the lucky few who would have an opportunity to travel to space with NASA, she was ecstatic. “I don’t think I ever smiled that big in my life,” she said during a press conference. This young woman, whose heroes include the likes of Ms. Frizzle, completed a Bachelor of Science in Biology and a Master of Science in Marine Sciences at the University of North Carolina, Chapel Hill. So far, she’s worked in a ton of exciting field experiences, including multiple Antarctic expeditions and NASA analog missions in British Columbia, Idaho, and Hawaii. We can’t wait to see what NASA has in store for her next!

3. Jasmin Moghbeli: Jasmin Moghbeli has known that she wanted to travel to space since at least the sixth grade, she tells The New Yorker, when she was assigned to write a book report on someone she truly admired. With a ton of inspirational figures to choose from, Jasmin settled on Valentina Tereshkova (AKA the first women in space). It was this early passion that fueled her academic pursuits as she ambitiously worked toward her Bachelor’s Degree in Aerospace Engineering with Information Technology at MIT, followed by a Master’s Degree in Aerospace Engineering from the Naval Postgraduate School. Prior to becoming a part of the 2017 NASA Astronaut Candidate Class, Jasmin was a Marine Corps Major and was decorated for flying Cobra gunships on 150 combat missions in Afghanistan.

4. Loral O’Hara: “Growing up in Houston, I had Johnson Space Center right down the road and I was able to visit often,” Loral O’Hara said in an interview with The Alumni Association of The University of Kansas. “My second-grade class even got to grow tomato plants that flew on the space shuttle, a program that I actually recently just found out is going on today with students flying seeds on the International Space Station. Those early experiments really hooked me and are a big part of what ignited the dream to be an astronaut.” Earning a Bachelor of Science in Aerospace Engineering at the University of Kansas and a Master of Science Degree in Aeronautics and Astronautics from Purdue University, Loral has definitely familiarized herself with NASA over the years. As a student, she’s participated in NASA’s KC-135 Reduced Gravity Student Flight Opportunities Program, the NASA Academy at the Goddard Space Flight Center, and the internship program at NASA’s Jet Propulsion Laboratory.

5. Jessica Watkins: 29-year-old Jessica Watkins from Lafayette was born to be in space. “I grew up always knowing that I wanted to be an astronaut,” she declared in an interview with Swapna Krishna. While she originally went to school to study mechanical engineering, she quickly found that she wasn’t as passionate about the subject as she once hoped. “I knew I wanted to continue studying space, and so I found the idea of geology, and of planetary geology, as my means of doing that. And so I think that’s been an important thing for me to remember in my life, that persistence pays off and that the path may change, and the path for me definitely did change, but the goal didn’t, and when one door is closing another is opening.” Earning a Bachelor’s Degree in Geological and Environmental Sciences at Stanford University and a Doctorate in Geology from the University of California, Los Angeles, Jessica is also no stranger to NASA and has previously worked at NASA’s Ames Research Center and NASA’s Jet Propulsion Laboratory, as well as being a collaborator on the Mars Science Laboratory rover, Curiosity. She was also a member of the USA Rugby Women’s Sevens National Team and even went to the semi-finals at the 2009 Women’s Sevens World Cup in Dubai. Seriously, what can’t this girl do?

Are you as excited as we are to see the next generation of women in NASA’s Space Program? Tweet us your comments by mentioning @BritandCo.

(Photos via NASA and Robert Markowitz)

Ashley Macey
Ashley Macey is a lifestyle freelance writer who loves all things fitness, wellness, and creativity. When she's not exploring her home in the Pacific Northwest with her dog Max, you'll probably find her curled up with a good book and some hot tea. Follow her daily jaunts on Twitter.
Adulting
Work
Adulting Girlboss
More From Work