Here Are the Most Controversial Celebrity Halloween Costumes Ever 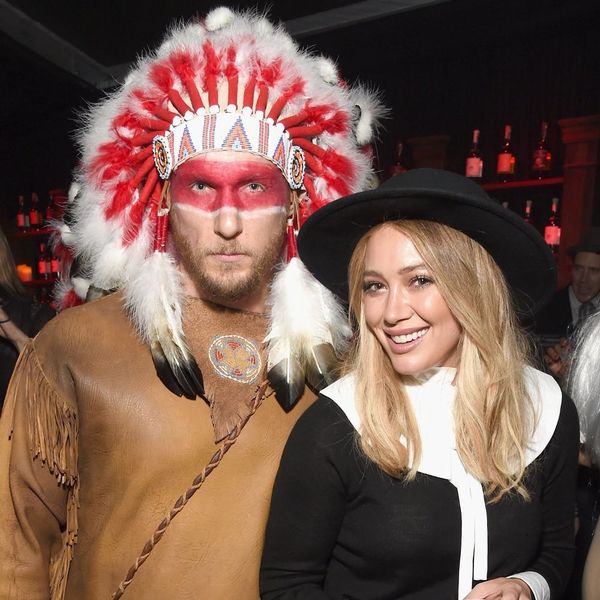 Choosing a Halloween costume is one of our fave yearly traditions, and it’s pretty darn clear that celebrities love to dress up as much as we do. And while we obviously like to believe that our celeb idols are pretty aware of what’s right and wrong, some seem totally tone-deaf when they step out on October 31 in offensive (and wildly cringe-worthy) costumes. From the mildly irksome to the WTF-were-you-thinking, here are some of the most controversial celebrity Halloween costumes we’ve seen.

1. Hilary Duff and her bae, Jason Walsh, pulled a mix of cultural appropriation and offensive timing by dressing up as a pilgrim and “Indian chief.” Not only totally wrong because cultures are NOT costumes, the current #NoDAPL protests in #StandingRock makes these costumes seem even more tone-deaf.

Julianne Hough's costume as Crazy Eyes from OITNB caused quite an uproar. Why? Because she was dressed in blackface pic.twitter.com/LNIxdplR7P

2. Julianne Hough: Julianne’s costume as Crazy Eyes from OITNB back in 2013 was a classic example of a WTF costume. It’s hard to imagine that anyone can think it’s okay to use blackface these days, but Julianne decided to go for it and, oh boy, did she ever feel the (totally justifiable) backlash.

Now thiiis is a Halloween costume. I think this is Heidi Klum as Hindu goddess Kali dayyyuuum 😂💙😍😍 pic.twitter.com/pZ5sYgAO4t

3. Heidi Klum: Heidi is known for going all-out with her costumes, but she made a major misstep when she showed up to her ninth annual Halloween party done up as the Hindu goddess Kali. Plenty of folks were not impressed, to say the least.

4. Ashley Benson: Pretty Little Liars star Ashley Benson may have thought she was showing the love to Cecil the Lion when she dressed up as him for Halloween last year, but folks were feeling the hate. If you remember, the well-known lion was killed by a hunter, which stirred a major uproar across the world. Ashely may have thought her costume was a tribute, but with comments like, “How could you? Everybody was so sad and mad when that stupid guy shot Cecil! U apparently couldn’t care less,” Ashley was quick to delete her original pic and reupload it without the Cecil reference, though, of course, people weren’t as fast to forget.

omfg when Lily Allen dressed up as Dr Luke for Halloween 💀🌚 #FreedomForKesha pic.twitter.com/rv3pndMjNZ

5. Lily Allen: While some saw it as a sign of solidarity with Kesha, others thought it was totally distasteful for Lily Allen to dress up as Dr. Luke in 2014. Ya know, the man who’s been accused of everything from sexual assault to forcing Kesha to starve herself and basically bringing her career to an almost complete halt? Yeah, him.

6. Khloé Kardashian: Though not everyone was ready to throw shade and some even liked Khloé Kardashian’s Storm costume this year, others were hating it HARD. From those who just thought it was a crappy version of a beloved X-Men mutant to those who called out the light-skinned star for dressing up as a dark-skinned character, it was a big ol’ mess.

7. Prince Harry: Back in 2005, Prince Harry wore what is no doubt the most offensive costume we’ve ever seen on a royal… or pretty much anyone, for that matter. Dressing up as a Nazi, there’s so much you can say about how wrong this is, but basically… NO! NO! NO!

What do you think the most offensive celebrity costumes EVER were? Tweet us @BritandCo!

Desiree O
Desirée O is a ‘Professional Bohemian’ who loves anything and everything related to the arts, entertainment, and pop culture. She ADORES being a ‘Newsy’ for Brit + Co, covering all of the latest tidbits of awesomeness that you want to read about. When she’s not writing, she’s either making messy art, going on long adventurous walks with her camera, or poking around over at bohemianizm (http://www.bohemianizm.com/). You can find out about Desirée O and her work at http://DesireeO.com/ or follow her on Twitter @DesireeO.
Halloween
Halloween Costumes
Halloween Halloween Costumes
More From Halloween Costumes