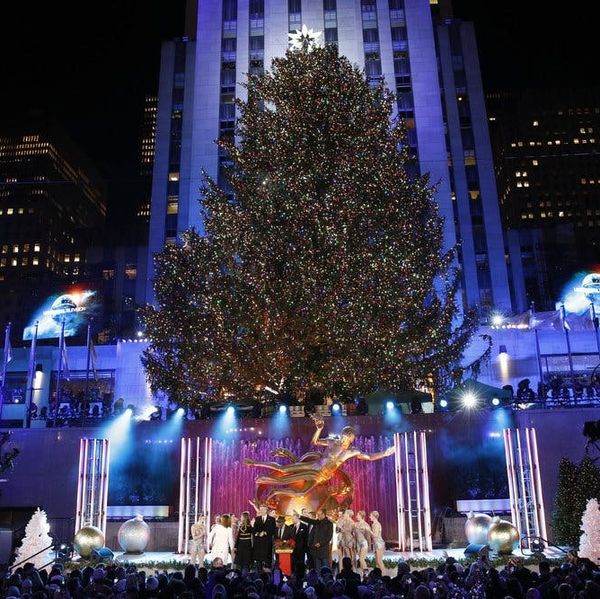 One of the best parts of the holiday season is the lineup of fun, festive TV specials — and this year's batch of seasonal shows is a good one. From over-the-top Christmas competitions to star-studded musical celebrations, there's something for everyone. Curl up with a cup of hot cocoa and check out our picks for the best original holiday specials and series in 2018. (Photos via Paul Drinkwater/NBC + Mike Rozman/NBC + Disney/Richard Harbaugh + Freeform/Todd Anderson)

The Great Christmas Light Fight (Monday, November 26, 9pm ET, ABC): This holiday-themed reality show sees lifestyle expert Carter Oosterhouse and interior designer Taniya Nayak judge the biggest, wildest, and most elaborate Christmas displays created by families across the country. Whoever wins the Light Fight trophy also takes home a $50,000 prize — which should help pay for some of the electrical bills those displays rack up. The extreme holiday fun kicks off with a two-part premiere special on November 26. (Photo via ABC/Byron Cohen)

86th Annual Christmas in Rockefeller Center (Wednesday, November 28, 8pm ET, NBC): Christmas in Rockefeller Center is appointment viewing every year, and 2018 is no exception. This year's event will feature appearances by Diana Ross, Martina McBride, John Legend, Pentatonix, Kellie Pickler, and others — all leading up to the lighting of the iconic tree in NYC. (Photo via Eric Liebowitz/NBC)

A Legendary Christmas With John and Chrissy (Wednesday, November 28, 10pm ET, NBC): John Legend and Chrissy Teigen's Christmas special promises to be a fun and festive affair, with guest appearances by the couple's famous friends (including Kim Kardashian, Stevie Wonder, and Awkwafina) and holiday music from Legend's new album, A Legendary Christmas. (Photo via Paul Drinkwater/NBC)

The Great American Baking Show: Holiday Edition (Thursday, December 6, 9pm ET, ABC): The US version of The Great British Bake-Off returns for a fourth season with hosts Emma Bunton and Anthony "Spice" Adams. Contestants will compete in a series of holiday-themed baking challenges in the hopes of impressing judges Paul Hollywood and Sherry Yard, who will choose America's Best Amateur Baker at the end of the season. (Photo via ABC/Mark Bourdillion)

Disney's Fairy Tale Weddings: Holiday Magic (Saturday, December 8, 8pm ET, Freeform): Hosted by Stephen "tWitch" Boss and Allison Holker, this special takes you inside some of the most romantic and elaborate holiday weddings at Walt Disney World Resort. This year features a Mary Poppins Returns theme and a performance by Martina McBride. (Photo via Freeform/Todd Anderson)

Ellen's Game of Games Holiday Spectacular (Wednesday, December 12, 8pm ET, NBC): Host Ellen DeGeneres will challenge competitors to a variety of wild, wacky, and weird holiday-themed games, complete with festive costumes (like that reindeer getup above). The winner will take home $100,000, which could put a lot of presents under the tree. (Photo via Mike Rozman/NBC)

Timeless (Thursday, December 20, 8pm ET, NBC): Timeless will bring its story to a close with a holiday-themed series finale just five days before Christmas. According to Entertainment Weekly, the time-travel drama will say goodbye with "an epic, unforgettable thrill ride through the past, present, and future, with a healthy dose of Christmas spirit." (Photo via Patrick Wymore/NBC)

Desiree O
Desirée O is a ‘Professional Bohemian’ who loves anything and everything related to the arts, entertainment, and pop culture. She ADORES being a ‘Newsy’ for Brit + Co, covering all of the latest tidbits of awesomeness that you want to read about. When she’s not writing, she’s either making messy art, going on long adventurous walks with her camera, or poking around over at bohemianizm (http://www.bohemianizm.com/). You can find out about Desirée O and her work at http://DesireeO.com/ or follow her on Twitter @DesireeO.
TV
TV
TV Holidays
More From TV