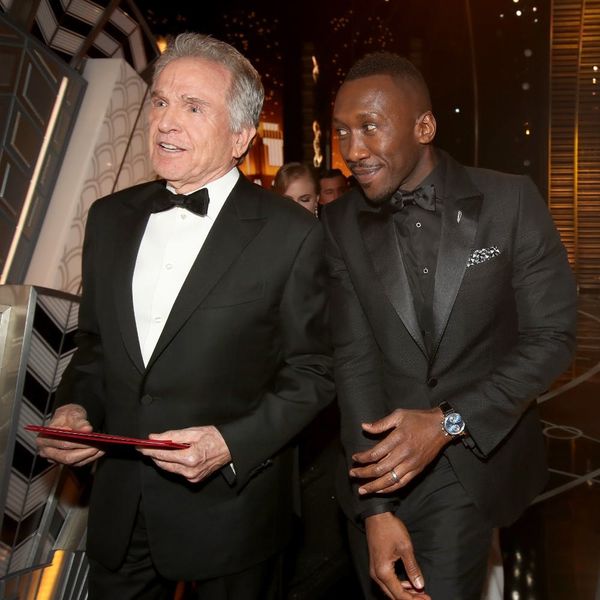 As the #OscarFail (AKA #OscarGate) watercooler talk continues to buzz, the folks responsible for the massive mistake are still trying to piece together exactly what happened. Now, new deets from backstage detailing the moments around the epic error reveal how the entire sitch went down, and it seems like a simple tweet may have been the reason behind one of the biggest blunders in Hollywood history.

PricewaterhouseCoopers is the accounting firm that tallies the Oscar votes and is known to take great measures to keep the results a secret until the big ceremony. This year, though, they might have wanted to take a little more care in how they handed over the envelopes.

Accountant Brian Cullinan has been identified as the man involved in the mix-up, and Variety received exclusive photos which show him backstage at the infamous moment. What the pics show has some people a little upset.

Despite the initial claim that Cullinan had grabbed the wrong envelope from a backup pile, the new pics show that this is untrue (or, at least, not the entire truth). As Warren Beatty and other stars mingled backstage, Brian Cullinan was photographed not only holding two separate envelopes, but also taking a moment to snap a pic of Emma Stone when he probably should’ve been paying attention to the important task that had been given to him.

Variety broke down the timeline, telling us that while Warren Beatty and Faye Dunaway took the stage at 9:03 (with the wrong envelope), Brian Cullinan was photographed on his phone at 9:04. At 9:05, Cullinan sent out a tweet that included a pic he had just taken of Emma Stone (which has since been deleted, natch). This means Cullinan was busy tweeting when the mind-blowing mistake went down. Oops.

Cullinan can even be seen running onto the stage as soon as he realized what was happening.

Granted, most of us have been distracted by social media when we probably should have had our minds on something else, but, dude! When you’re responsible for one of the biggest announcements coming out of Hollywood each year, you might want to put off tweeting until your job is done.

“He feels very, very terrible and horrible. He is very upset about this mistake,” PWC chairman Tim Ryan told Variety. “While I am concerned, I hope we will be judged on how quickly we reacted and owned up to the issue.” We’ll see if folks forgive them (given the fact that they owned up), or if this is one people hold onto for a while, considering the mistake could’ve been avoided.

What do you think about the fact that the PWC accountant was tweeting during the big mess-up? Let us know @BritandCo!

Desiree O
Desirée O is a ‘Professional Bohemian’ who loves anything and everything related to the arts, entertainment, and pop culture. She ADORES being a ‘Newsy’ for Brit + Co, covering all of the latest tidbits of awesomeness that you want to read about. When she’s not writing, she’s either making messy art, going on long adventurous walks with her camera, or poking around over at bohemianizm (http://www.bohemianizm.com/). You can find out about Desirée O and her work at http://DesireeO.com/ or follow her on Twitter @DesireeO.
Oscars
Pop Culture
Oscars twitter
More From Pop Culture