Nightly Newsy: A Li’l Victory for the Celeb-Protested #NoDAPL + More 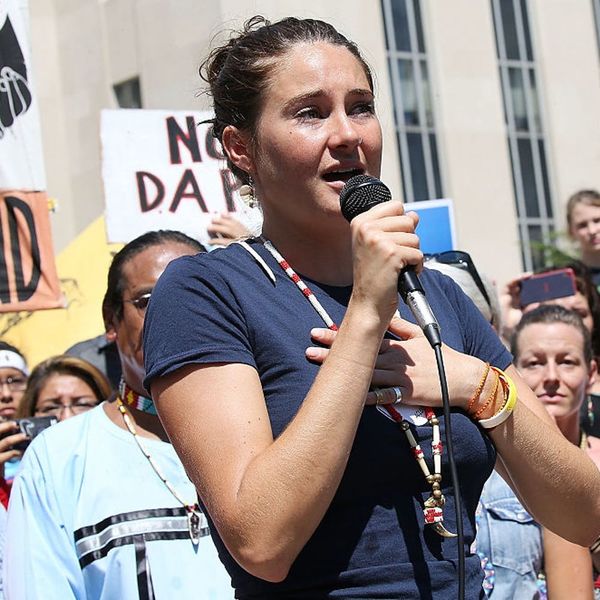 Before you head home for the weekend and (maybe) unplug for a little while, take a look at the top stories of the day. It always pays to be informed if you’ve got a dinner party coming up!

1. Wells Fargo has been fined for bogus accounts: This week Wells Fargo announced it would lay off at least 5,300 people over the widespread practice of signing customers up for credit cards fraudulently, in order to make growth targets. Over several years, employees created around 1.5 million bank accounts and applied for 565,000 credit cards customers hadn’t asked for. The bank has also received a $185 million fine, including the largest ever from the Consumer Financial Protection Bureau ($100 million). It will also pay back $2.6 million in fees that accrued to customers through accounts and cards they never wanted. (Photo via Getty)

2. Another player takes a knee: Colin Kaepernick, quarterback for the San Francisco 49ers, set off a discussion about patriotism, protest and sports when he spoke up about why he was sitting down during the national anthem before football games. He’s received criticism but also a lot of support, including from some other NFL players. At last night’s season opener between the Denver Broncos and the Carolina Panthers, Broncos linebacker Brandon Marshall joined Kaepernick by kneeling during the anthem. Afterward he said “the message is I’m against social injustice,” though he noted that he is “not against the military or police or America at all.” Fellow 49er Eric Reid had already joined his teammate, and the Seattle Seahawks have said the entire lineup plans not to stand for the anthem prior to their first game on Sunday.

3. #NoDAPL won one, then lost one: The Standing Rock Sioux tribe lost its court fight today to stop construction of the Dakota Access Pipeline. One of the tribe’s biggest worries was about their drinking water being contaminated, as the pipeline is set to run underneath a nearby lake — it would also disrupt a sacred burial ground. The federal government announced after the court’s ruling that it would hold off on authorizing construction near the lake while looking into “whether it will need to reconsider any of its previous decisions regarding the Lake Oahe site under the National Environmental Policy Act (NEPA) or other federal laws.” Opposition to the pipeline has been fierce, and protests against it have included celebs like Shailene Woodley, Rosario Dawson and Susan Sarandon.

It's quiet here now, but in 30 days time, it's going to get LOUD. #footballiscoming #autzenherewecome #goducks

4. Dunn Hall is no more: Trustees at the University of Oregon voted unanimously to rename a dormitory that bore the name of a late KKK leader, Frederic Dunn, who taught at the school in the early 20th century. Until a new name is agreed on, the now-former Dunn Hall will go by Cedar Hall. The Black Student Task Force launched a petition to change the name last November. It’s a small step, as student Natalie Fisher told the Register-Guard, and comes after the death of Larnell Bruce Jr., a 19-year-old who was intentionally run over by a white supremacist in Gresham, Oregon in August.

5. Ex-Facebooker ponies up: Facebook co-founder Dustin Moskovitz has donated $20 million to a number of Democratic groups in an effort to help defeat Donald Trump in the upcoming election. Despite having “reservations about anyone using large amounts of money to influence elections,” Dustin and his wife Cari Tuna wrote that they hope their donation will impress upon the Republican Party that a campaign “built on fear and hostility… compel[s] people to act in response.” For a couple with an estimated worth of $10 billion, this donation is really just a drop in the bucket.

Tannara Yelland
Tannara is a freelance writer and editor, an occupation perfectly suited for her affection for drinking too much coffee and keeping odd hours. She usually writes about politics, economics, and pop culture. Some day she will put to use the hundreds of hours she's spent watching Say Yes to the Dress and write THE definitive analysis of the show.
Politics
Celebrity News
Politics