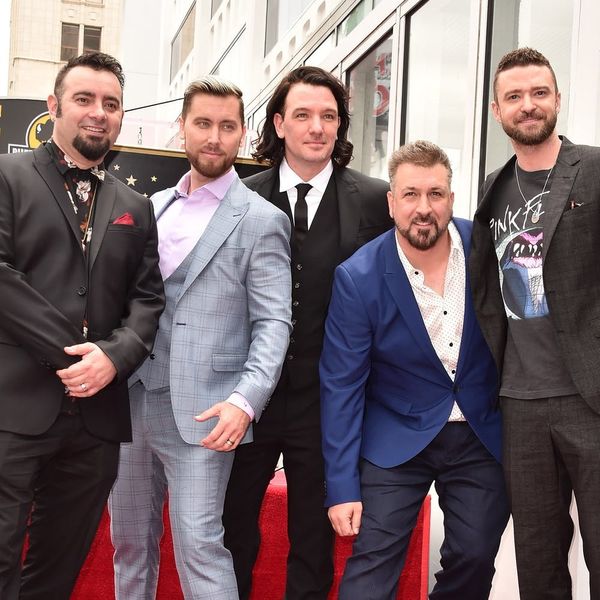 Just one day after reuniting to receive a star on the Hollywood Walk of Fame, *NSYNC showed up on The Ellen DeGeneres Show to spill untold secrets from their boy-band heydays.

DeGeneres wasted no time getting the group — Justin Timberlake, JC Chasez, Chris Kirkpatrick, Joey Fatone, and Lance Bass — to open up, insisting they play a revealing game of “Never Have I Ever.”

The game started with a question about whether the *NSYNC guys had ever “hooked up with someone twice [their] age.” Fatone and Kirkpatrick admitted they had, while Timberlake took a minute to do some math in his head before flashing his “I have never” paddle.

It didn’t take long for another group of ’90s superstars to be brought into the equation, though. The talk show host confronted *NSYNC with the statement, “Never have I ever hooked up with a Spice Girl.” It was a quick no from the entire group — except Timberlake. The Man of the Woods singer hesitated for a second before DeGeneres answered for him, flashing her “I have” panel in front of him. He matched it, then quickly flipped it to say “I have not.”

Prior to the group’s Hollywood Walk of Fame ceremony, Bass told Variety that it’s not every day the group gets to spend time together. “It’s very rare that all five of us get to be in the same room together, but when we do, it’s like time never passed,” he said. “We just pick up exactly where we left off.”

Watch *NSYNC’s entire game of “Never Have I Ever” below.

What do you think about *NSYNC’s revelations on Ellen? Let us know @BritandCo!