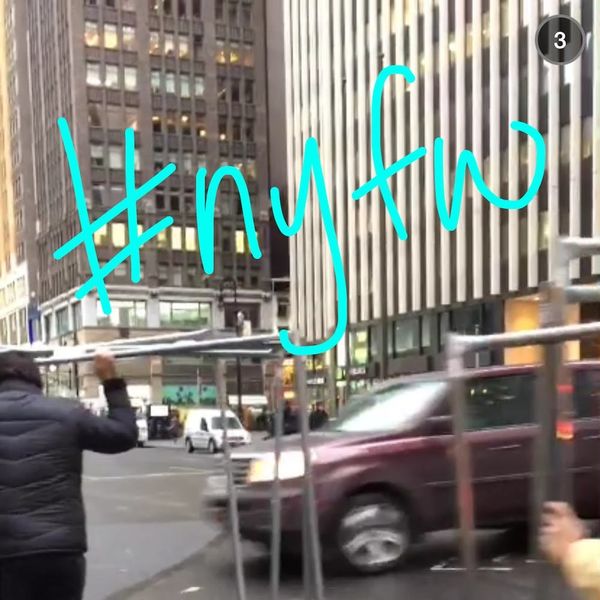 Instagram is so passé. (JK… we love you, Insta!) But there’s something so exclusive about Snapchat, which makes it perfect for events like New York Fashion Week, when everyone is vying for a glimpse of the latest looks and who’s sitting in the front row. Maybe it’s the spontaneity or maybe it’s the ephemeral nature of Snapchats, but for a real, sneak-peek, behind-the-scenes NYFW, these are the brands, media outlets and tastemakers you should be following on Snapchat.

1. Glamour Magazine: When it comes to Fashion Week, if you want to know what’s going down, you have to stay on top of the fashion magazines. They give you the inside scoop, like this peek into H&M’s showroom. (via Snapchat glamourmag)

2. Racked: Racked is one of our go-to fashion news websites, and their Snapchat gives you a look at what it takes to be a fashion editor in NYC. You’ll also get to see all the free clothes and shoes that come with the job. Rough life. (via Snapchat rackeddotcom)

3. Lucky Magazine: Lucky’s been going hard on the Snaps lately. We have a feeling they’re going to be Snapchatting NYFW like cray cray, and we can’t wait. (via Snapchat luckymagazine)

5. Cosmopolitan: Another brand that’s joined with Snapchat to launch the new Discover feature, Cosmo posts a fair share of fashion stories, but it’s the inspirational quotes and gifs that really get us going. This might also be the quickest way to check your horoscope ever. (via Snapchat Cosmopolitan)

6. Washington Post: Style editors at the Washington Post are reporting from New York all week and posting to the newspaper’s style blog. Fingers crossed we get some good NYFW Snaps, but the latest Snaps from within the Post’s archives have been pretty good too. (via Snapchat washingtonpost)

7. Rebecca Minkoff: One of fashion’s social media mavens, Rebecca Minkoff debuted her Spring 2014 collection on Snapchat before it hit the runways in New York. We’re hoping she pulls off something just as cool this year, so we’ll be watching the Snaps, just in case. (via Snapchat rebeccaminkoff) (Photo by Frazer Harrison/Getty Images for Mercedes-Benz)

8. Kristina Bazan: The Swiss fashion blogger behind Kayture, Kristina Bazan is chronicling her adventures at New York Fashion Week. You’re sure to get some behind-the-scenes access by following her Snaps. (via Snapchat kristina_bazan)

9. Eva Chen: Editor-in-chief of Lucky Magazine and the creative force behind the newly launched Lucky Shops, Eva Chen is known for her social media savvy. In fact, she used Snapchat to announce the birth of her baby, so we can only imagine what else she’ll share. (via Snapchat theevachen212)

10. Who What Wear: We can only imagine how fashionable the ladies behind Who What Wear are, so thank goodness they’re willing to share their style secrets via Snapchat. We can’t wait to see what these insiders think of this year’s newest styles. (via Snapchat whowhatwear.com)

11. Refinery29: If you’re as obsessed with Refinery29 as we are, you have to follow their Snapchat. We love getting peeks into their office and behind the scenes of their photo and video shoots, so obviously we’ll be paying attention to what they have to say about NYFW. (via Snapchat Refinery29)

12. Annie Georgia Greenberg: And while we’re on the subject of Refinery29, we’ll also be following their Senior Style Editor as she Snaps her way through Fashion Week. Actually, we might care more about what she’ll be wearing than what’s coming down the runways. (Snapchat agg3653) (Photo by Jamie McCarthy/Getty Images for ASPCA)

13. Fashionista: It’s one of the leading websites when it comes to smart fashion criticism, so we swear that you’ll want to know what these editors have to say about the latest designs popping up on the runway and in your local stores. (via Snapchat Fashionista_com)

14. The Cut: New York Magazine‘s fashionable little sister is all over the Snaps. The digital magazine’s editors are always at the leading edge of fashion, street style and anything that has to do with being a woman. (via Snapchat the.cut)

15. Man Repeller: Pretty high up on our list of favorite fashion bloggers, Leandra Medine and her humor thrives when it comes to runway fashion, so we can’t wait to see what she has to say about this season’s looks. Will any of them stack up to Man Repeller status? Oh, for sure. (Snapchat manrepeller) (Photo by Neilson Barnard/Getty Images for Target)

16. Snapchat: This might seem redundant, but Snapchat is known to curate its own Snaps during big events, like New York Fashion Week. No need to follow, Snapchat will automatically send you the stories you need to see.

Who are your must-follow Snapchatters? Let us know in the comments!

Amanda DiGiondomenico
Amanda is a freelance writer and graphic designer who blogs about living a stylishly nerdy life at The Spendicate. A lifelong resident of Baltimore, MD, Amanda is an art school dropout, who managed to earn a masters degree in nonfiction writing. On the weekends, she's an expert guacamole maker, a novice jogger and an intermediate yogini.
New York Fashion Week
Tech
New York Fashion Week Snapchat social media
More From Tech