Stop and Sniff the First Ever iPad App That Recognizes Smells 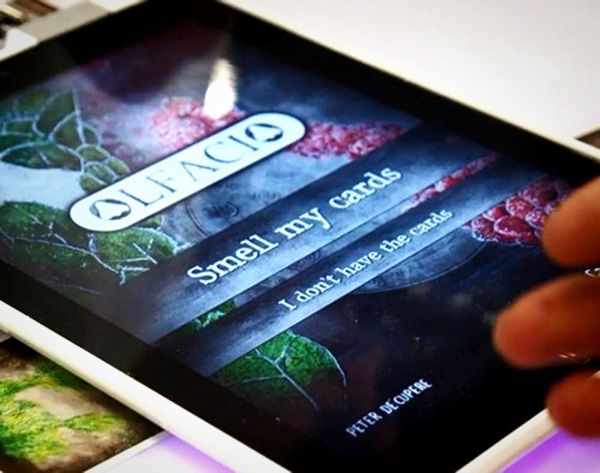 Smell-a-vision is coming to an iPad near you in — and not just to wake you up with the scent of sizzling bacon. There’s a new app turning noses at SXSW this year and it combines a whiff of the future and a hint of the past. Olfacio is a free game for iPad where you grow virtual flowers using smell recognition and a “technology” you’re probably much more familiar with: scratch-and-sniff.

Along with a download of Olfacio, you’ll need the set of 10 cards (about $21 USD) that each feature a different flower and a scent you can unlock with your fingernail. To get your garden to grow, scratch and sniff to pick your favorites and enjoy that trip down memory lane, plus a beautiful bonus fusion of art and tech with illustrations inspired by the work of Belgian artist Peter De Cupere.

Choose two flowers and place them on your iPad’s screen inside Olfacio’s odor incubator. Your tablet “smells” the flowers by reading touch-recognition patterns embedded onto each card. It fuses the two you picked and a unique flower that represents your combo blooms on the screen.

Okay, so it sounds like the most exciting part of this whole process is actually the old school entertainment aspect, where you get to scratch and sniff like the stickers of your youth. We were hoping Olfacio would be the instigator of digital scrapbooks that emitted smells to stir memories or the catalyst for a Smell-a-rific Shazam :(

Even though Olfacio might not turn your iPad into a curious puppy or a digital scent dispensary, it could open up a new genre of apps that use similar interactive card recognition. Sticking with smells, companies could let you create scents from home using cards with different notes on them. Physical coupons could still get you that twofer deal online. A deck of funny scratch and sniffs could add an interactive element to reading to the kids from your Kindle.

Feeling, now smelling, what’s next for our smart devices — tasting?!

What would you use smell recognition on a smart device for? Would you rather have a tablet that smells or a smartphone that emits them?