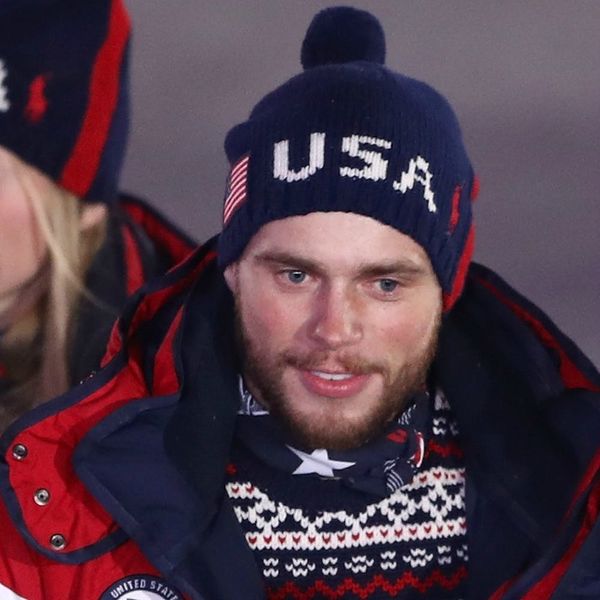 Adam Rippon isn’t the only openly gay athlete competing for the US at the 2018 Winter Games. Skier Gus Kenworthy publicly stepped out of the closet somewhere between the Sochi Winter Games and this year’s PyeongChang event. Now, the skier’s simple pre-race kiss for good luck, caught on camera, has sent Olympics watchers and LGBTQ+ advocates swooning.

Didn't realize this moment was being filmed yesterday but I'm so happy that it was. My childhood self would never have dreamed of seeing a gay kiss on TV at the Olympics but for the first time ever a kid watching at home CAN! Love is love is love. pic.twitter.com/8t0zHjgDg8

“Didn’t realize this moment was being filmed yesterday but I’m so happy that it was,” he tweeted. “My childhood self would never have dreamed of seeing a gay kiss on the TV at the Olympics but for the first time ever a kid watching at home CAN! Love is love is love.”

39-year-old Wilkas told TIME that if they’d known their peck was going to be televised, they would have gone for something more romantic. “We should have made out in front of people,” he joked, before noting how exceptional the moment really was.

“It’s good that it’s televised because it normalizes it more,” he said. “I would imagine it would be a huge moment for a young gay kid to see an awesome athlete so open and proud of himself and not caring what anyone thinks of his sexuality.”

Wow okay i just whimpered to myself “so beautiful” 😭

And although fans like Britney Spears are cheering the athlete on, Wilkas also told TIME that simply being out and gay at the Olympics hasn’t always been easy for Kenworthy.

“It’s hard,” said Wilkas. “He wants to be the voice, one of the heroes for his community alongside Adam [Rippon]. But I think it just adds a lot of pressure to the moment.”

“There are people on both sides,” he went on. “The gay community looks up to him, then the people who hate him for being who he is and can’t wait to see him fail. There’s a sense of wanting to prove them wrong.”

Fans who were cheering the kiss shared their gratitude with the hashtag #TeamUSGay on Twitter.

Watching delayed but regardless of what happens tonight @guskenworthy is an inspiration and I’m so proud to have you represent my country and community! #TeamUSGay #TeamUSA #Olympics #LGBT

Although 26-year-old Kenworthy isn’t the first LGBTQ+ athlete to kiss his partner at an Olympic event, the tender moment with his boyfriend, Matthew Wilkas, does seem to be the first same-sex Olympic kiss to be televised on a national prime-time broadcast, and that’s what sets it apart. Back in 2008, NBC censored Australian diver Matthew Mitchum’s mentions of his partner Lachlan after the athlete won a surprise gold.

Kat Armstrong
Kat has been a writer, social media maven and mom for longer than she's willing to admit. She's also spent time in front of and behind the camera, interviewing celebs, politicians and acting as a producer for fashion and artistic photography shoots. When she isn't writing for various orgs and publications, she's hanging with her kids, husband and French Bulldog, Peter, in Toronto, Canada.
LGBTQ
Gender Issues
LGBTQ Olympics