On What Would Have Been Aaliyah’s 40th Birthday, Activists Are Demanding That RCA Records Drop R. Kelly 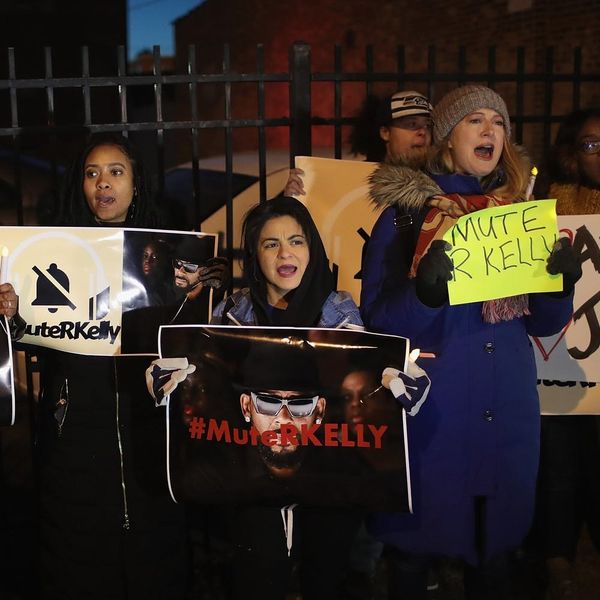 The documentary was preceded by a campaign called #MuteRKelly, which, in partnership with Time’s Up, aimed to get radio stations, streaming services, ticket sellers, concert venues, and RCA Records to drop R. Kelly’s music and performances. Today, participants in the campaign are protesting outside RCA Records headquarters in New York City, once again demanding that the company sever its ties with Kelly. Wednesday’s protest includes activists from Color of Change, UltraViolet, and Girls for Gender Equality.

The timing of the protest is notable in that it marks what would have been the 40th birthday of the late R&B singer Aaliyah (born Aaliyah Dana Haughton), who Kelly is reported to have illegally married when she was just 15 years old (and which Kelly denies). Haughton died in a 2001 plane crash at the age of 22.

In addition to participating in the protest against RCA Records, Color of Change is also collecting signatures for a petition demanding that RCA drop its contract with R. Kelly. A portion of the call to action that accompanies the petition reads: “RCA promotes and funds his explicit music and they actually allow him to brand himself as ‘The Pied Piper’ after the fairytale character who used his musical talents to lure children away from their parents. This is unacceptable — it’s past time for R. Kelly to stop making money to perform songs that glorify his hunting and assaulting young women…”

Though allegations of abuse against Kelly have been known for many years, it wasn’t until more recently that the rest of society caught up to the concerns and activism of the Black women who first sounded the alarm. Now that the allegations been more thoroughly addressed through the eyes of his accusers in the docuseries, there’s more hope that RCA can be pressured to drop the controversial artist. (Kelly, meanwhile, has long denied any allegations of abuse and reportedly threatened legal action against the Lifetime network for making claims that his lawyers maintain are false.)

In May of last year, Hollywood powerhouses including director Ava DuVernay published a statement saying, “As women of color within Time’s Up, we recognize that we have a responsibility to help right this wrong. We intend to shine a bright light on our WOC sisters in need. It is our hope that we will never feel ignored or silenced ever again.” Time’s Up also called on RCA to end its relationship with Kelly when they released their statement.

RCA may be cracking, too. TMZ reported on Monday that sources with inside information say RCA will not produce or release any new music from Kelly, and will not invest new money into his projects, pending a reported criminal investigation against Kelly in Georgia. Whether or not the company will risk a potential lawsuit from Kelly by ending his contract early remains to be seen, but TMZ correctly notes that RCA would certainly be subject to even more public backlash if the company were to release new music from Kelly following the Lifetime series.

The pressure against Kelly’s remaining, alleged enablers is certainly mounting. With a boost from #MeToo and Time’s Up as well as progressive non-profit organizations such as Color of Change, the original, years-long #MuteRKelly campaign may now have the critical mass needed to tip the scales.

Elizabeth King
Elizabeth King is a politics, history, and culture writer based in the Twin Cities. She is generally pretty cranky but still enjoys traveling, music from the early 2000's, and plotting the resistance. Feel free to say hi on Twitter at @ekingc or check out some of her work at www.elizabethcking.com.
Activism
Current Events
Activism Celebrity Controversy
More From Current Events