Paris and Nicky Hilton Are the Queens of NYFW, and It’s 2004 Again 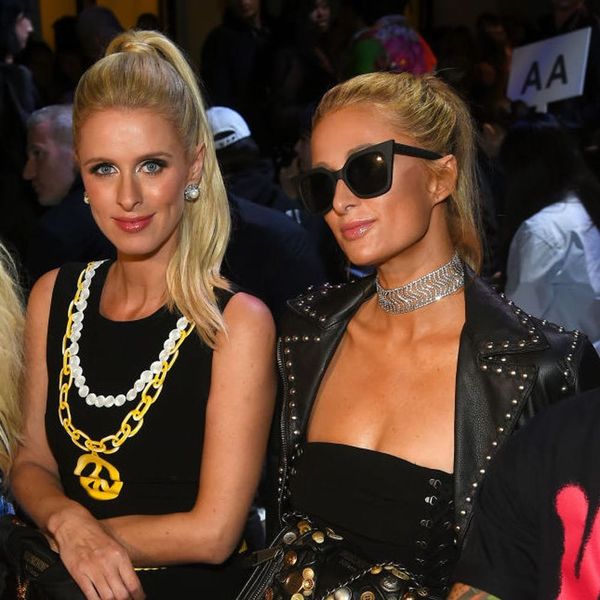 Though New York Fashion Week celebrates all the best of what’s to come in the next season, we can’t help but feel like we’ve time-traveled back to 2004. Queen of the 2000s, Paris Hilton, and sister Nicky Hilton Rothschild are front and center at all the shows, and all we can say is: That’s hot.

The socialite (now a DJ, who will be doing a set at the Galore x Juicy Couture party on Wednesday, Sept. 13), and her sister (who announced her second pregnancy in July), may not dominate tabloid coverage the way they once did, but these two high-fashion heiresses are tearing up the Big Apple in all their blonde glory. Seeing them at NYFW is seriously making us want to break out our bedazzled Sidekicks and update our MySpace profiles, because the mid-aughts nostalgia is seriously strong here. Check out some of their best moments… so far.

The duo sat in the front row of Jeremy Scott’s spring 2018 show, and both Hilton sisters gave a subtle nod to the ’90s-themed collection. Nikcy told Women’s Wear Daily that she loves “flannels and baby-doll dresses and Doc Martens and the grunge revival.”

Paris even posed with her former BFF (and Simple Life costar) Nicole Richie’s baby sister Sofia Richie, who walked in the Scott show and hung out with Paris at the Monse show just days later.

So proud of my lil sis @SofiaRichie #Killingit during #NYFW. ✨👯🗽✨

Of her black satin cutout gown with crystal embellishments, Hilton told the New York Post, “I’m obsessed with crystals. I love it when they have that with cutouts and see-through dresses — it’s so fun.”

And after a long weekend of fashion shows, Paris relaxed at home wearing… what else? Her signature Juicy Couture hot pink sweatpants.

Now all we need are our Ugg boots and Von Dutch hats and we’re set.

Do you miss the era of Paris and Nicky Hilton in the early 2000s? Let us know @BritandCo!

Arielle Tschinkel
Arielle Tschinkel is a pop culture junkie who went to NYU because the Olsen twins went to NYU (really). She is a freelance writer whose work has also been featured on HelloGiggles, Refinery29, SheKnows, Bustle, Hollywood.com, and many others; and she's living her dream one Britney Spears GIF at a time. Follow her on Twitter @mrstschinkel or visit her website at arielletschinkel.com.
Fashion Week
Style News
Fashion Week New York Fashion Week NYFW