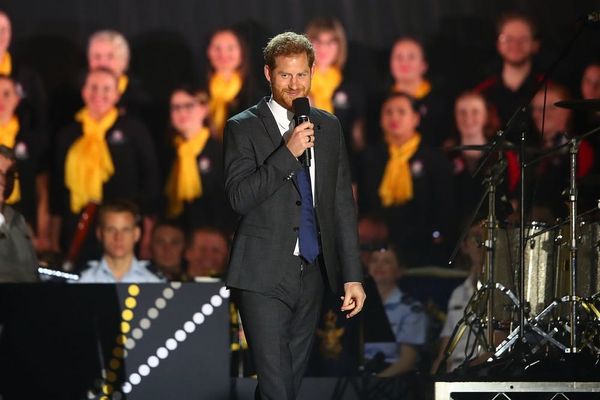 Since Kensington Palace announced Meghan Markle’s pregnancy earlier this week, she and Prince Harry have been the center of attention, and their royal tour of Australia has turned into a fabulous excuse to talk about all things baby. From the Duchess of Sussex opening up about her pregnancy symptoms to her hubby referencing their bundle of joy during an adorably nervous speech, the parents-to-be obviously have baby on the brain. Prince Harry proved as much as he kicked off the Invictus Games Opening Ceremony on Saturday, October 20.

Taking to the stage at the Sydney Opera House to help start the games, which will see wounded and recovering service members and veterans competing in a series of sporting events, the 34-year-old prince couldn’t resist giving a sweet shout-out to his growing family.

“First of all, thank you for the welcome you have given Meghan and I over the last few days,” he gushed. “I have been so proud to be able to introduce my wife to you and we have been so happy to be able to celebrate the personal joy of our newest addition with you all.”

The royal then went on to show off his sense of humor, adding, “I have a mission for all of you Aussies. And it’s not how many shrimps you can put on the barbie! Our competitors have made it to these games, most of them traveling from many thousands of miles away. It’s your job to cheer them on and share their stories.”

Earlier in the day, Prince Harry was photographed rehearsing the speech onstage at the Sydney Opera House in front of an audience of one: his beaming wife. Kensington Palace shared a snap of the touching moment, writing, “Almost time for @InvictusSydney… The Duke of Sussex makes his final speech preparations ahead of tonight’s Opening Ceremony.”

As you’ll likely recall, the Invictus Games hold a special place in the couple’s relationship and hearts. After all, they made their official debut as a pair during last year’s competition in Toronto, sharing a public smooch at the closing ceremony and solidifying their love in front of the world.

What do you think of the latest royal baby announcement? Tweet us @BritandCo.