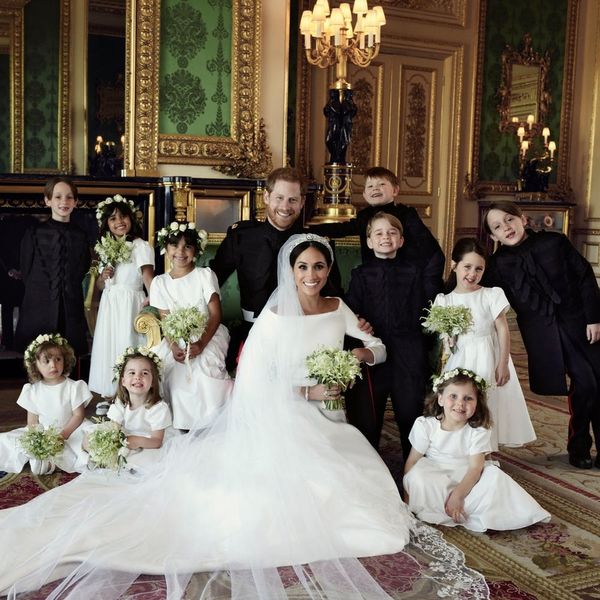 Prince Harry and Meghan Markle’s royal wedding was full of picture-perfect moments. And now that the weekend has come to a close, the newlyweds have released a set of official wedding portraits, and they’re every bit as stunning as we expected them to be.

The photos were taken by fashion photographer Alexi Lubomirski, who also snapped their engagement photos. According to Kensington Palace, the couple posed in the Green Drawing Room at Windsor Castle following the post-ceremony carriage procession.

The first photo is a group shot of the entire royal family — except the latest addition, Prince Louis Arthur Charles — with Markle’s mother, Doria Ragland, and the wedding’s bridesmaids and page boys.

Another group portrait features the happy newlyweds with their entire bridal party, including, of course, the always-adorable Prince George and Princess Charlotte, who hammed it up with huge grins and casual poses for the camera.

A third portrait features just Prince Harry and Duchess Meghan sitting together on the stairs at Windsor Castle moments after tying the knot. Not unlike their engagement photos, the romantic black-and-white photo is informal and intimate, and captures the newlyweds’ happiness and love for each other.

“The Duke and Duchess would like to thank everyone who took part in the celebrations of their wedding,” the palace said in a statement. “They feel so lucky to have been able to share their day with all those gathered in Windsor and those who watched on television across the UK, Commonwealth, and around the world.”

Lubomirski shared the portraits on his Instagram, taking a moment to reflect on the honor of being the official photographer of the royal wedding proceedings. “It has been an incredible honor and privilege to document the Duke and Duchess of Sussex’s inspiring journey of love, hope and family; from the engagement photos, all the way through to the official wedding and family portraits on Saturday,” he said. “This has been a beautiful chapter in my career and life, that I will happily never forget.”

What do you think of the official royal wedding portraits? Let us know @BritandCo!