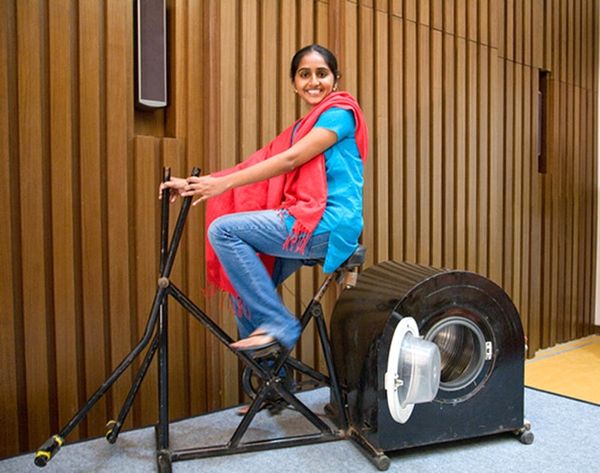 What were you up to at age 14? Maybe pining over Taylor Hanson? Or making millions of friendship bracelets? Possibly scoring the winning goal in your JV soccer game against the rival high school across town!? We think those are all completely acceptable ways to spend your formative teen years, but you’re going to feel like you were sleepin’ on the job a little when you find out what Remya Jose was up to.

Even though it took Remya four hours a day to get to and from school every day (your commute doesn’t seem so bad now, does it?!), she was a superstar pupil: scoring high on exams and winning prizes at science fairs for inventions like a fridge that keeps fruits fresher and a casserole that conserves heat. While finishing her 10th year, Remya’s mother fell ill. At the same time, her father was also undergoing cancer treatment so that left 14-year-old Remya and her twin sister in charge of the household chores, including laundry. A “to do” that pretty much no one likes to do, the task was especially tasking for the girls who did not have a washing machine at home. With little time to spare (and a chunk of the day already spent traveling for school) the Jose family needed an at-home solution and Remya had one.

She studied how the conventional washing machine works, then set out to make her own that could run on man (or, woman) power instead of electricity. Everyone was skeptical, including friends who were like, “what?” her mother who told her not to waste her time and her father who at first suggested it was better for girls to learn how to wash clothes by hand in case there’s no washing machine at their future hubby’s house. Ahem. At this point, many of us would feel, hmm, totally uninspired and unmotivated?? But Remya kept at it.

Subbing mechanical power for electrical power, she sketched up a basic diagram of a machine that doubles as an exercise machine, running when you pedal it. Her father found the parts his daughter needed, took them and the sketch to a neighborhood auto shop and asked them to make it.

The manual washing machine was a success — and one that we want in our apartments yesterday. You put the clothes in the machine’s cylinder, fill its cabin with water, add detergent and let soak for 10 minutes, then pedal for three to four more. Pedaling even helps the washed clothes get about 80% dry, solving the next laundry step as well. The machine is portable, could bring laundry to rural areas without electricity, could save energy in urban areas and could help out more girls like Remya and families like hers. All while bringing a little exercise into the equation.

After that, Remya was the coolest kid in her ‘hood, with friends and neighbors lauding the “little scientist” down the road and engineers begging her to work with them. Now 23, Remya has just about the coolest job ever as a Serial Innovator for the National Innovation Foundation in India. Earlier today we talked about how a passion for coding can turn into a career and a way to help others on a huge scale — it looks like the same can be said about the ol’ life hack, too.

What do you think of Remya’s invention? Have you heard of a superstar kid making amazing things that could make our lives better? If so, share below!

Lisa Raphael
In her past professional lives, Lisa has served the masses as the Editorial Director at Brit + Co, Bieber Whisperer at J-14, Golden Girls Fan Club Prez at Lifetime and Talk Show Host Understudy to Katie Couric. Now, she's taking on the sports world at The Relish, teaching Hairography 101 in her spare time and will forever be trying to fill the hole Zayn Malik left in her heart.
Home