20 Foods for a Seattle vs New England Super Bowl Throwdown 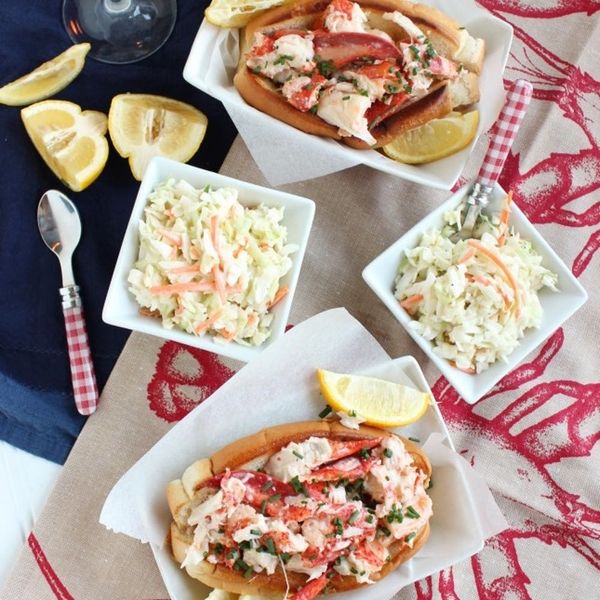 We’re less than a week away from having another East Coast-West Coast rivalry go down. But this time around, it’s not all about hip-hop (how ’90s). Instead, it’s centered on something a little more sporty: the New England Patriots versus the Seattle Seahawks. With their abundance of artisanal cheese, apples and seafood fests, these two competitors may be more linked than we think (even though they probably won’t admit it). Explore the food cultures of the two teams’ home turf with these 20 treasured, well-known foods. Then you can be the judge of who has the #winning cuisine.

1. Seattle Asian Salmon Bowls: What do the Pike Place Market fish throwers and this gorgeous salmon bowl have in common? Each makes seafood exciting, in their own special way. (via Skinny Taste)

2. Coffee Ice Cream Cupcakes: Take your pick of these crave-worthy cupcakes or four other buzzworthy coffee-enhanced desserts. Any of them will surely put you into #BeastMode. (via Brit + Co)

3. Beecher’s “World’s Best” Mac and Cheese ($35): You don’t need to travel to Seattle to get a taste of the “World’s Best” mac and cheese. Now you can have it delivered to your doorstep, or even try your hand at stirring up a batch from scratch.

4. Renee Erickson’s Manila Clams: Erickson’s restaurant, The Walrus and the Carpenter, might be known for its oysters, but she works wonders with other shellfish as well. Serve these herbed, steamed clams with tons of crusty bread for dipping. (via Condé Nast Traveller)

5. Classic Cherry Daiquiri: You’ll find no shortage of craft foods in the Emerald City, and soda is no exception. Mix up this rockin’ rum daiquiri with sweet, red and yellow Rainer cherries for an even more on-point sip. Either way, your #12thman (or woman) will definitely approve. (via The Glitter Guide)

6. Top Pot Triple Coconut Donuts: We’re pretty sure you can’t go wrong with any of Top Pot’s “hand-forged” options. These old-fashioned toasted coconut donuts are cakey, moist and crunchy all at once. P.S. They also make a mean apple fritter. (via Saveur)

7. Serious Biscuits: These Southern-style biscuits are the perfect canvas for preserves (huckleberry would be so very Pacific Northwest-appropriate) or your next breakfast sandwich. (via Splendid Table)

8. Dick’s Hamburgers French Fries: Dick’s Drive-In knows their way around a potato. Unlike our beloved In-N-Out, they take the time to blanch their freshly cut French fries, so each one is perfectly fluffy in the middle and crisp on the outside. (via Washington Grown)

9. Slow Cooked Pork Taquitos With Chocolate Mole: We’re all about the theobromine, and Theo Chocolate’s can certainly satisfy our cravings. These taquitos topped with a chili-laced-chocolate mole would make for one awesome Super Bowl appetizer. (via Hip Foodie Mom)

10. Almond Morning Rolls: If you enjoy nibbling on a croissant with your morning cup of joe, you’ll love these bakery-worthy morning buns just as much. (via Sifter in the City)

11. Apple Dutch Baby Ice Cream With Caramel Sauce: Dutch babies are the perfect solution for when you feel like pancakes, but don’t want to spend tons of time flipping one flapjack after another. (via Seasons and Suppers)

13. Slow Cooker Boston Baked Beans (Vegetarian): Smoked paprika adds a nice layer of bacon-esque flavor to this pot of (almost) authentic slow cooker baked beans. We’re pretty sure Pat the Patriot would be beggin’ for bowlful of the stuff after just one whiff. (via Kitchen Treaty)

14. Best Boston Cream Pie: Now this is one “pie” that those who prefer cake over crust can definitely get behind. (via Food52)

15. Best Ever Clam Chowder: All of New England — well, except for Rhode Island — enjoys their clam chowder creamy. You’ll enjoy spooning up this classic version chock-full of clams, potatoes, bacon and veggies even if you’re far from the shore. (via Pineapple + Coconut)

16. Sweet Autumn Cornbread + Vermont Cheddar Casserole: Corn has played a pretty significant role in the New England food culture ever since the first Thanksgiving. But you don’t have to wait ’til the holidays roll around to enjoy this cheesy cornbread casserole. (via The Cozy Apron)

17. Peppermint Schnapps Whoopie Pies: First there was #DeflateGate, now #WhoopiePieGate is in the works — both New England and Pennsylvania lay claim to these heavenly handheld cakes. (via The Wall Street Journal)

18. Maple Milkshake: You don’t need to be from Vermont to enjoy this delicious, four-ingredient maple milkshake. (via Butternut Mountain Farm)

19. Lobster Pot Pie: Class up your next pot pie by making lobster the star instead of plain ol’ chicken. (via Baked by Joanna)

Share your favorite foods and makers from these regions with us below!

Heather Sage
Heather Sage is a gluten-free recipe developer and freelance writer living in Orlando by way of the Silicon Valley. When she isn’t playing around with alternative flours in the kitchen, she can be found tackling DIY projects around the house or exploring her neighborhood. Check out her gluten-free recipe blog, A Sage Amalgam.
recipe roundup
Party
recipe roundup Super Bowl