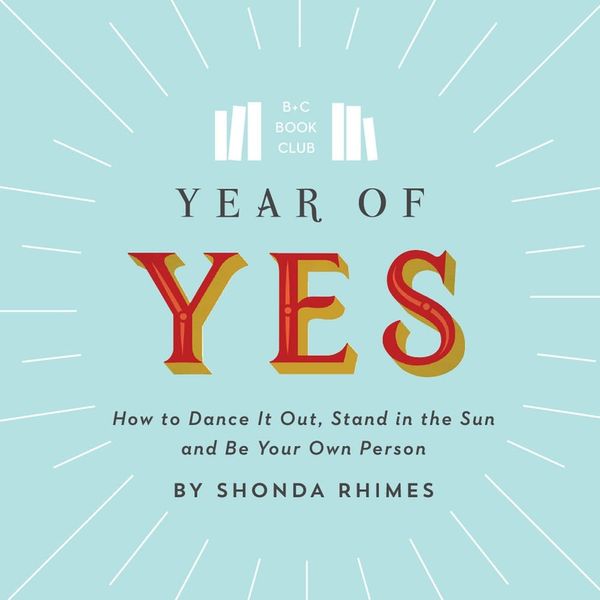 In between holiday partying, eating ALL the Christmas cookies and catching up on 2015’s best reads, we’re also dreaming about the kickass projects we’re ready to start in the new year. All that plotting means we’re turning to our favorite #girlbosses for advice, starting with the brilliant, honest and creative Shonda Rhimes. Join us in celebrating setting + achieving goals with the December B+C Book Club pick: The Year of Yes: How to Dance It Out, Stand in the Sun and Be Your Own Person by Shonda Rhimes. Over the next month, we’re living our life the way Shonda says we should: by taking action and embracing the possibilities!

In The Year of Yes: How to Dance It Out, Stand in the Sun and Be Your Own Person, producer and writer Shonda Rhimes, aka the mastermind behind shows like Scandal, Grey’s Anatomy and How to Get Away With Murder, challenges herself to spend a year saying yes to EVERYTHING: new opportunities, invitations and more. The result is a memoir that also serves as inspiration for becoming the best hero in your life. We’re more than ready for the challenge!

There’s no mentioning Shonda Rhimes without acknowledging the revolutionary television shows that earned her fame: Grey’s Anatomy, Scandal and How to Get Away With Murder. Whether you’re a Gladiator, you’re still crying over McDreamy or you’ve somehow skipped out on the glory that is Shondaland TV, her television shows have captivated millions thanks to their dramatic, authentic portrayals of strong, intelligent and, yes, flawed women. Over the past few years, Shonda has dished out some major advice and inspo for all ambitious ladies. Scroll on to learn why she’s the ultimate #girlboss.

1. She faked it ’til she made it — and it worked. When Shonda created Grey’s Anatomy, she told NPR, “There’s a reason that Meredith Grey was an intern starting out on her first day of work on a job that she had no idea what she was doing — because my first day on television, I had no idea what I was doing and that was Grey’s Anatomy.” Take it from Shonda: Just because something is scary or unfamiliar doesn’t mean you can’t do it.

2. She focuses on her strengths and forgave her weaknesses. In an interview with Robin Roberts, Shonda revealed her original career goal was to become a literary author. One disastrous novel draft later, she realized, “I am not Toni Morrison,” and that was okay, because she had other talents. Instead of aspiring to be someone else, Shonda dedicated herself to her strengths — television writing — which ultimately led to her success.

3. “Ditch the dream and be a doer, not a dreamer.” In 2014, Shonda revisited her alma mater to deliver a commencement speech. While the entire speech is worth a listen, one of her best pieces of advice is her approach to dreams. She urges Dartmouth graduates to focus on concrete actions, rather than lofty dreams, so that their goals actually stand a chance at coming true.

4. She owns her work. Once she found success with her shows, Shonda stopped taking network notes — she had a vision and she was prepared to execute it. In an interview with The New York Times, she told them, “What was great for me about Scandal was I had earned a lot of political capital with the network… I had done Grey’s, I had done Private Practice. What were they going to do, fire me? I wasn’t worried about what anybody else thought. This one was for me.” While accepting criticism can be helpful, it’s important to know when to draw the line, so that it doesn’t derail your creativity.

5. “I am making TV look like the world looks.” In her 2015 speech at the Human Rights Gala, Shonda said that she doesn’t like classifying her shows as “diverse television shows” because it suggests that they don’t reflect real life. In making it a priority to include women of color and LGBTQ actors in her shows, Shonda has set a powerful precedent in what “normal” looks like on television.

Ready to join the B + C Book Club? Snag your copy and tweet or Instagram your book using the hashtag #BritCoBookClub. Let us know in the comments what you think!

Angela Velez
Angela is an MFA Fiction candidate at the University of Pittsburgh. You can find her reading obsessively, wandering bookstores and watching melodramatic television.
Book Club
Lifestyle
Book Club