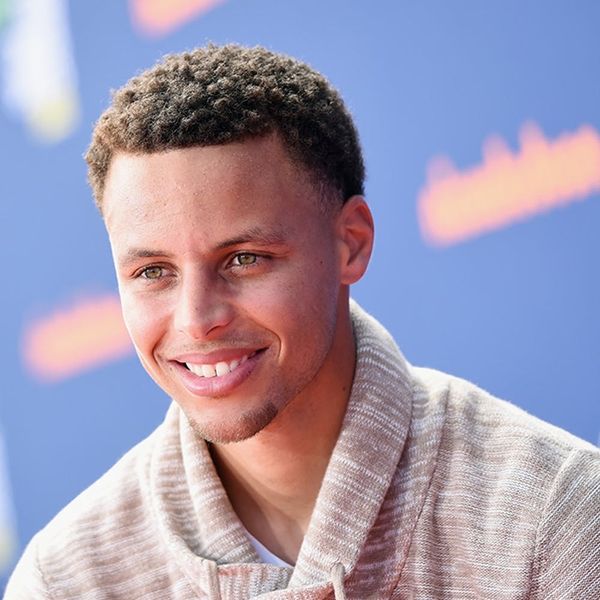 If you thought the only sports-related event this week was the ESPYS, you’d be wrong. After Arthur Ashe Courage Award recipient Caitlyn Jenner brought us all to tears with her moving speech, the focus in the world of athletes turned to the second annual Nickelodeon Kids’ Choice Sports Awards. While the awards show was totally overflowing with athletes and celebs looking glam, one father-daughter duo had everyone watching them. That would be NBA Champ + Golden State Warriors point guard Stephen Curry and his too-cute-for-words two-year-old daughter Riley.

Not only have the past few months been action-packed for the NBA star player, who took home three awards at the Nickelodeon event — Best Male Athlete, Sickest Moves + Clutch Player of the Year — but it’s been a pretty unforgettable week as well. Stephen’s wife Ayesha gave birth to their second daughter Ryan Carson Curry last weekend (who’s probably enjoying the view in her gender-neutral nursery) and he took home Best NBA Player and Best Male Athlete at the 2015 ESPYS. To say he’s having an unforgettable summer would be a major understatement.

But like most of his time in the spotlight over the past few months, his adorable daughter Riley grabbed the attention from him (and everyone else) once more. Walking the orange carpet with her NBA 2015 MVP proud papa she stole the show, without even taking home a trophy for herself. And so the countdown begins for Riley’s next public appearance. <3

How cute was this father-daughter duo at the Nickelodeon Kids’ Choice Sports Awards? Share your thoughts with us in the comments.