‘Stranger Things’ Season 3 Finally Has a Premiere Date (and a New Poster!) 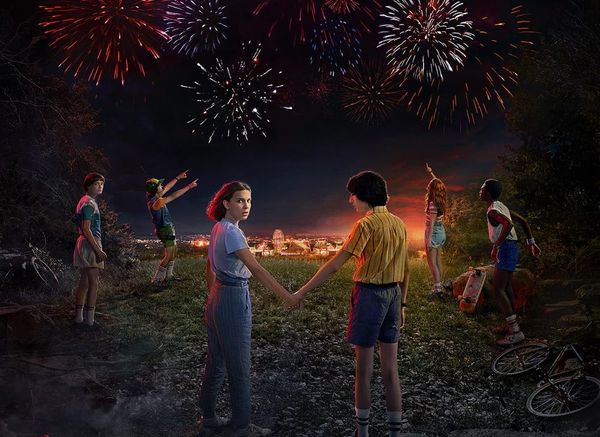 Mark your calendars: Stranger Things‘ long-awaited third season finally has a premiere date. Netflix announced on Monday, December 31, that the ’80s sci-fi series will return on July 4, 2019, more than a year-and-a-half after the premiere of season 2.

The streaming giant debuted a poster for the new season, too, and it should make #Mileven fans very happy. The artwork shows Eleven (Millie Bobby Brown) and Mike (Finn Wolfhard) holding hands as Eleven looks back at the camera (and, presumably, some unseen evil). Dustin (Gaten Matarazzo), Lucas (Caleb McLaughlin), and Max (Sadie Sink) stand nearby, mesmerized by a display of fireworks lighting up the sky, while Will (Noah Schnapp), still haunted by his experience in the Upside Down, looks over his shoulder at whatever Eleven is seeing behind them.

The tagline reads: “One summer can change everything.”

Netflix has been teasing the third season for more than a year now. Earlier in December, the Stranger Things social media accounts announced the new episode titles. And according to executive producer Shawn Levy, the action will take place one year after the events of season 2, in the summer of 1985.

“Mike and Eleven are going strong, so that’s a relationship that continues, and same with Mad Max and Lucas,” Levy told The Hollywood Reporter at PaleyFest in LA last March. “But again, they’re like 13- or 14-year-old kids, so what does romance mean at that stage of life? It can never be simple and stable relationships, and there’s fun to that instability.”

We’ll also see more of the fan-favorite friendship between Dustin and Steve (Joe Keery). “I’ll just say we won’t be abandoning the Dad Steve magic,” Levy teased. “I don’t want to say much more, but I literally feel that we were walking along and we stumbled onto a gold mine with Dad Steve.”

Steve won’t be totally free to hang out with Dustin, though. As we saw in a teaser last July, he’ll be working at an ice cream shop called Scoops Ahoy in the Starcourt Mall.

Are you excited for Stranger Things season 3? Tell us @BritandCo!