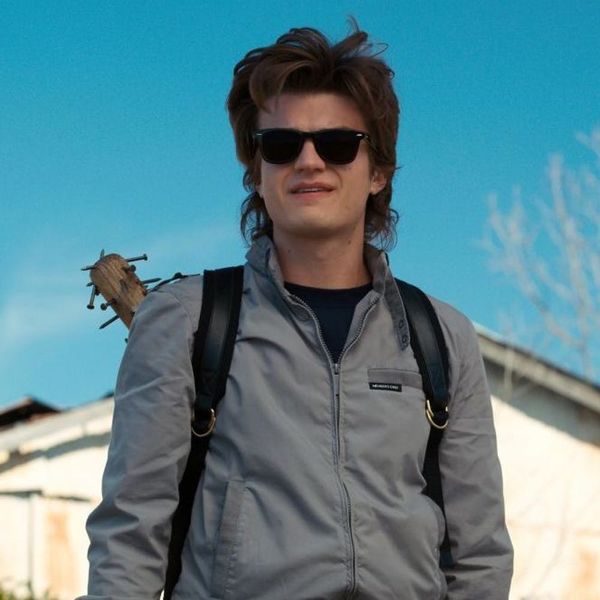 Now that you’ve finished season two of Stranger Things, you’re probably in need of a new distraction while you wait for new episodes. So now’s probably a good time to chat about one of the most important aspects of the series: the wonder that is Steve Harrington’s hair.

Steve Harrington, played by the talented Joe Keery, wasn’t the only thing that saw a huge improvement since we last saw the Hawkins kids. While we were introduced to that nearly perfect coif back in season one, it’s somehow gotten better in season two.

In the show, Steve tells Dustin that the secret behind his swoon-inducing coif is Fabergé Organics shampoo and conditioner and four puffs of Farrah Fawcett hairspray, but the *actual* product used on set was quite different, and finding it took some trial and error.

Sarah Hindsgaul, Stranger Things‘ hairstylist, revealed the secret ingredient, as well as the inspiration, behind those glorious tresses. And finding the holy grail product wasn’t easy; the pro tried 15 products before landing on the final pick.

She told Refinery29, “We use Kevin Murphy, which he also uses for himself now; he’s completely convinced that it’s the only product that works. It’s a dry wax called Night Rider. We work [it] through the back and on the sides to get more texture. Last year there was no texture; it was just hairspray, but this year we have this gritty, rockstar texture to it.” Keery apparently likes the stuff so much that he keeps swiping it from set.

What’s really impressive, though, is that it’s all Keery’s hair — no extensions necessary. Hindsgaul admits that it’s an ordeal to manage. “It takes about 30 minutes and he has to not wash it the day before,” she says. “We blow dry it with a round brush with lots of Rene Furterer mousse in it, then we apply the Kevin Murphy in the back and on the sides, a little Oribe Texture Spray for more grit, then we spray the hell out of him with R+Co Hairspray.”

As far as inspiration goes, the duo looked to old Brad Pitt and George Clooney photos, as well as the music video for a-ha’s “Take on Me” to perfect the big style. Keery loves it too; in the past he cut it short to manage it, but now he says he won’t be going short again.

Steve’s hair: hot or not? Tell us @BritandCo!

Shea Lignitz
Shea can be found in the nearest bookstore or brewery, exploring the great outdoors, or blasting Led Zeppelin. She grew up in the cold and rain of Northern California's redwoods but is currently wandering around Texas.
Celebrity Hair
Hair
Celebrity Hair Hair Products TV
More From Hair