This Cool Pool Lets You Swim in Oceans Around the World 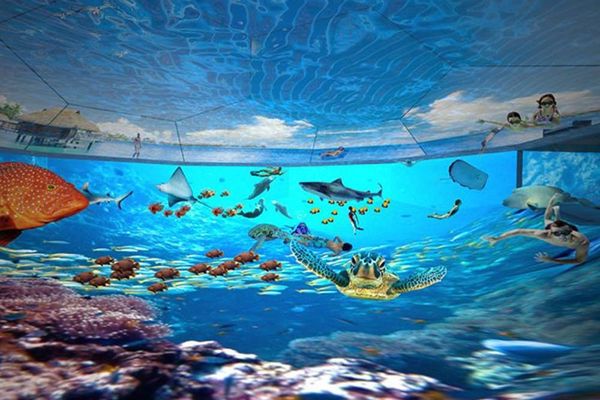 After that pretty graphic Shark Week, we don’t blame you if you’re a little hesitant to slip into a scuba suit. You have two arms, and you’d like to keep it that way. We’re with you. But if you’re still itching to spy on some sea life there might be a pretty rad, definitely-keep-all-limbs kind of option headed your way.

While this sounds pretty freaking awesome, don’t go grabbing your goggles just yet. At this point, the pool is only an idea. The creators are currently looking for partners to help make this shark tank a reality. OVA Studio says they are looking to brands like the Discovery Channel, National Geographic or possibly Google to help develop the Swimarium’s live underwater feed and bring the project to life.

If the pool does become a reality, swimmers will have the option to wear 3D goggles and hydrophones will replicate dolphin sounds, making the virtual experience eerily similar to the real thing.

Of course, OVA Studios realizes the Swimarium would most likely be marketed as an attraction, but profit isn’t their only mission. They hope it will spread awareness for fragile and endangered barrier reefs and all the life that relies on them.

Once this pool becomes a reality, what will the next virtual pool look like? OVA Studios is thinking… space! Simulating zero gravity in the water while taking in a live video feed from NASA’s Hubble doesn’t sound half bad. If this is an option, we might scratch our names off that Mars mission list… we’re starting to rethink freeze-dried food for life.

Would you go swimming with virtual sharks? Tell us what you think about this idea!