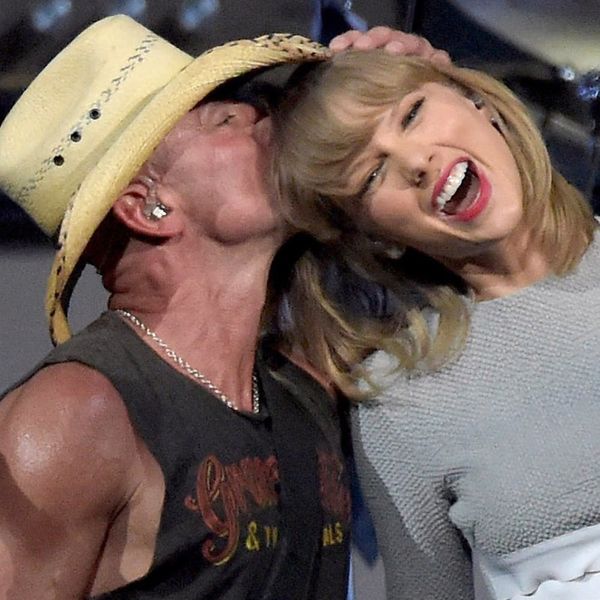 The “Old Taylor” may be dead, but she’s not been forgotten! As longtime fans of the “Gorgeous” singer know, Swift, 27, has some deep country roots. In the past 11 years, the singer-songwriter has gone from a groundbreaking country singer with her debut, self-titled album to a bona fide pop icon. While she’s mostly left the country world behind, sans for a writing credit on Little Big Town’s “Better Man,” fans got a glimpse of the Nashville artist they originally loved thanks to country star Kenny Chesney, who just released their live duet of his song, “Big Star.”

The track is featured on the musician’s own newly released live album, Live in No Shoes Nation, and was originally recorded live in 2015, during the opening night of his Big Revival Tour when the Grammy-winner surprised him onstage for his birthday. The song tells the story of a female country singer’s (“Garth Brooks in a skirt”) fast rise to fame, a sentiment Swift herself can surely identity with.

In fact, as Chesney told Rolling Stone, it’s more or less about her. “That night, my friend Taylor Swift showed up on my birthday to surprise me… [and it] was ironic, because in a lot of ways, that song and that lyric is Taylor’s journey.

It’s also about the Taylors to come. “This song is about a girl who had a dream and followed it,” the “All the Pretty Girls” crooner tells the Nashville crowd during the song’s opening. “I know from living in this town for so many years that there’s a lot of girls out there in the audience with a lot of dreams in their head. This song goes out to you, alright?”

Chesney and Swift have a long history together — it was the No Shoes Nation star who gave the then 17-year-old her touring start in 2007, when she opened for him on his Flip-Flop Summer Tour. And the duet is a perfect reminder of those days gone by.

As he told Rolling Stone in a video clip, “She represented that song so well and sang it so great. It was a really special moment for me, and I’m glad I got to share that moment — and my birthday present from Taylor — with so many people.”

Live in No Shoes Nation also compiles some of Chesney’s favorite live concerts into one album with other duets from Uncle Kracker, Joe Walsh, David Lee Murphy, and college radio icon Dave Matthews.

Check out the Taylor duet below!

Are you an old-school Taylor Swift country fan? Tell us @BritandCo!

Kat Armstrong
Kat has been a writer, social media maven and mom for longer than she's willing to admit. She's also spent time in front of and behind the camera, interviewing celebs, politicians and acting as a producer for fashion and artistic photography shoots. When she isn't writing for various orgs and publications, she's hanging with her kids, husband and French Bulldog, Peter, in Toronto, Canada.
Music
Music
Music Taylor Swift