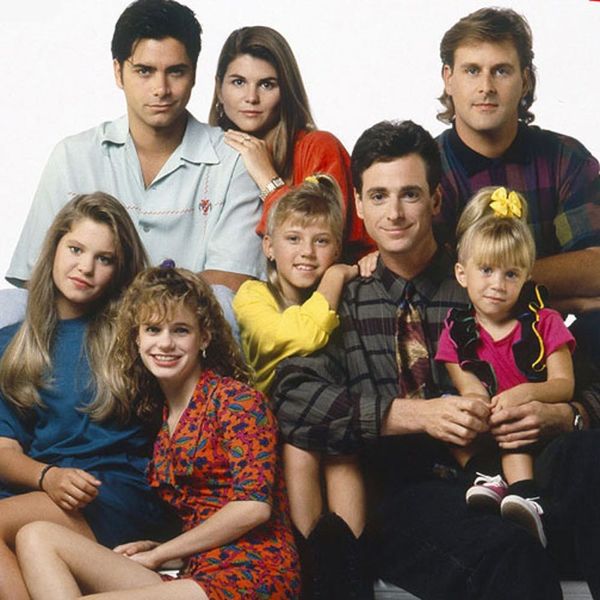 It sounded too good to be true when we heard that Netflix was doing a Full House reboot back in March, to debut early 2016 — exciting but sooo far away. Today the first teaser for the new series arrived, and suddenly it all feels very real. And, okay, a little emotional.

The trailer opens with that familiar shot of the Golden Gate Bridge (SO to Brit HQ!) and then we see the exterior of our favorite television house — that actually made no sense layout-wise once you saw the interior, but we will overlook that — then cut to shots of that kitchen and the living room where so many wonderful Full House memories took place (Jessie and Rebecca’s wedding, the Beach Boys showing up at the door, Michelle and her catchphrases). That know-it-as-soon-as-you-see-it signature ’80s Full House yellow font tells us “Life is Full Again.” So far we only see a young golden retriever in the living room (who we assume and hope is a descendant of Comet), but then we start to hear some very familiar voices. First DJ, then Steph, then Jessie, then Joey (“Cut it out” — classic!), then Danny and finally Becky. “Welcome home,” says Danny. We know he is talking to DJ, but really? We kinda feel like he is talking to all of us.

We know the main plot — Fuller House will focus on DJ Tanner-Fuller (Candace Cameron-Bure), a recently widowed mother of two, who learns she is pregnant with her third child. Always there for her, her sister Stephanie (Jodie Sweetin) and BFF Kimmy (Andrea Barber) move in with DJ to help. Hmm, remind you of anything? Bob Saget, Lori Loughlin, John Stamos and Dave Coulier will also appear in the series, and Stamos is also producing. And though we would like to see an almost 30-something Michelle say, “You got it dude!” Stamos Tweeted in May that the Olsens will not be stopping by.

All 13 episodes of Fuller House will premiere Friday, February 26 on Netflix, so get ready to laugh and probably cry a whole a lot (who else was choking up during that trailer?!) Check out the teaser below:

Tweet @britandco what you think of the first trailer for Fuller House!

Meredith Lepore
Meredith is a freelance writer/editor who writes for Levo League, Bustle, Refinery 29, Instyle.com as well as magazines including Marie Claire, SELF, Women's Health and Cosmopolitan. Before going freelance she was Editor in Chief of the women's career site The Grindstone. She earned her Masters in Magazine, Newspaper and Online Journalism from the Newhouse School at Syracuse University. Meredith resides in New York full time and enjoys SoulCycle, jogging and playing with her Yorkshire Terrier Otis, who also loves SoulCycle.
Netflix
Pop Culture
Netflix