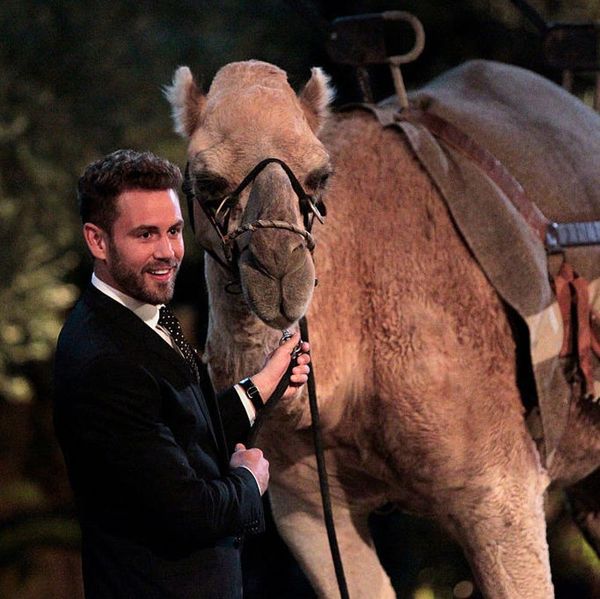 **Warning: Spoilers ahead, so if you haven’t seen last night’s episode of The Bachelor... go watch it!**

The Bachelor is finally back, which is a pretty strong way to start off 2017. Nick Viall has been brought back again, under the guise of “helping him finally find love” (even though he seems to be having as much luck IRL as the rest of us, particularly at weddings — more on that later), and we’re all excited to see our fave runner-up stumble his way through his own season.

At the beginning of the episode, we got the typical “see Nick without a shirt!” and “look at Nick walking around, see — he’s a real person!” shots that we usually get with the show, but it was more self-deprecating than usual, which I appreciated. In general, the show could take notes about showing the more human side of people. Anyway, let’s get to the good stuff!

MEETING THE WOMEN + THE INTROS

We learned Alexis probably owns more costumes than clothing, Corinne has a nanny (for herself), and Danielle M. saves BABIES. There also seems to be more diversity on this season than usual, and that’s important. We also learned that Liz and Nick met at Jade and Tanner’s wedding (another Bachelor Nation couple that recently got married, for the uninitiated) and didn’t give Nick her phone number, but she’s now here to get to know him. TBH, it seems like she just wants Bachelor fame, and I’m honestly not down for it.

I can't tell which of these girls I'm most looking forward to advertising hair gummies and skinny tea to me. #TheBachelor

The women were packed into the limos like sardines and sent on their way to meet Nick, with predictably hilarious conversations to follow. Funny how you hear a lot of “Nick is so hot!” and “He’s had a lot of practice!” but never “We’re all likely going to hate each other at some point!”

As far as intro highlights, Elizabeth was 100 percent wearing a wedding dress, and I thought it was so strange that no one addressed that! Back in Sean Lowe’s Bachelor days, that kind of boldness was enough to basically get you to final three. Then there’s Taylor, a mental health counselor who called Nick out on his past behavior, so I’m def rooting for her… as long as she hears him out eventually.

The “runner-up” joke Sarah made actually made me giggle; most of the jokes contestants make are pretty cringeworthy, so I give her major points for that (she literally “ran up” to meet him in sneakers). I like that the women were already talking about how sex was an important part of a relationship during the cocktail party and intros — that’s traditionally something the Bachelor empire has shied away from, yet it’s definitely something that happens on the show, and there’s nothing wrong with transparency.

Many of the women were in red dresses — so many, in fact, that when a woman rode up on a camel they were so distracted by her red dress that they didn’t say anything about the camel. Alexis, an aspiring dolphin trainer from New Jersey, showed up in a shark costume (and heels!) that she insisted was a dolphin costume (it’s definitely a shark costume). Maybe SHE was the dolphin, and the shark ate her? Either way, points for creativity. At one point she said, “I was going to wear a red dress too, thank God I didn’t!” and I snort-laughed.

so #thebachelor is making left shark a thing again

Danielle M., the neonatal nurse, showed up with maple syrup and insisted on feeding him some from her finger. If I was on a reality show, I would have it in my contract that no one could put their fingers in my mouth — at the very least not on night one. Then, Jaimi showed up and used her septum ring to made a transphobic joke about having balls, which is… not great. I mean, it’s not just your first impression with Nick — it’s also your first impression with America. She then repeated it to the room of women. It’s not like Bachelor Nation has ever been super aware, but it was pretty disappointing. Now, on to…

The red dress scandal continued to bother the women all throughout the night. I suppose during a night that you’re trying to distinguish yourself among other people, your clothing is one way of doing it… but it’s doubtful that Nick TRULY cared about their outfits.

One thing that was missing this time around was a truly drunk contestant, which TBH, I’m totally okay with. It’s tradition that one (or two) people get super drunk on night one and have to be calmed down (or removed), but everyone pretty much kept their cool, save for a few tears. Alexis’s face got pretty red at some points, but that’s probably because her costume was hot under those bright lights — and she was cracking me up with those dance moves. During the cocktail party, the women talked about Nick in a super strange way — half like fans, and half like psychologists. They didn’t talk about him like they wanted to date him, they talked about him like they wanted to psychoanalyze him. But whatever, that’ll make for good TV.

I did appreciate that he called them “women” instead of “girls” — that’s so often not the case on this show. He also kept saying “empowered,” which felt a bit like he was trying to be a motivational speaker, but I can take it or leave it. He had a great talk with Rachel, and I immediately called that she’d get the first impression rose (I was right!) and I think she’ll go far. TBH, I actually hope she doesn’t get to the very end, but makes it far enough to be the next Bachelorette.

So a woman of color with a post-graduate degree gets the first impression rose?! Welcome new era for #TheBachelor.

He also had a really great talk with Danielle M. about her career, and what it’s like to be a neonatal nurse — he really does seem pretty invested in this.

Wait, is #TheBachelor having an extended conversation with a woman about her career? Mind. Blown.

Nick and Liz finally had their conversation about their ~history~, and he called her out for not getting his number from Jade after their wedding hookup. She said it was because “her opinion changed after seeing him on Paradise,” but that seems weird — she still could’ve gotten it. It was actually pretty satisfying to watch. Corinne got the first kiss, which is totes villain behavior, not to mention her penchant for sh*t-talking and “I’m here for Nick” type talk, and bragging about her time with him. She also sang the Nickelodeon theme song after kissing him, which was… weird.

One more thing: I had a feeling the girl in the yellow dress (I forget her name and I don’t want to look it up) wore it JUST to have her Beauty and the Beast ballroom dance moment, and she could probably go home happy now.

Once it became clear the rose ceremony was imminent, people started freaking out about time and the tears started coming. Jasmine was the first to cry, and also the first to speak the traditional Bachelor line, “I’ve never been in this situation before!” because of course, everyone else has dated a guy with 25 other girlfriends. Alexis the dolphin continued to have a great time, while Corinne body-shamed her, saying maybe she was wearing the costume because she had a “bad body underneath.”

Kristina, a girl in the blue dress who hadn’t really gotten any air time, started crying in the beginning of the rose ceremony and became the exposition for the whole thing somehow.

Tfw #TheBachelor chooses a shark over u pic.twitter.com/cO1reqWfBF

Everyone was nervous, there were tears, blah blah blah — but there weren’t any surprises. The dolphin stayed, Corinne stayed, Liz stayed, everyone who got any real screen-time stayed, and as usual on the first night, the women who were sent home did their exit interviews in the early morning light, revealing just how long this process really takes.

So far, Liz hasn’t told anyone that she and Nick have hooked up before — she’s playing that one pretty close to the chest, and in previews they’ve edited it to look like that blows up later on, but who knows what they’re all really crying about (everything? All having to share the same curling iron? Who knows). It’s honestly surprising when they don’t blurt out something juicy like that right away, and depending on how long she stays, she may not get to tell them at all.

Alexis the dolphin actually seems like a lot of fun, and she made Nick laugh a lot, but she probably isn’t mature enough for anything long term. I bet she’ll be fun on group dates but only last about halfway through the season. Rachel, Taylor and Danielle M. are my favorites as of right now, with Rachel at the top, but I definitely want her to be the next Bachelorette rather than Nick’s top pick.

In the previews, we heard that Jaimi previously had a girlfriend (and that Nick had no problem with it — I’m excited to hear their conversation), and it’s great that they have an openly bisexual/queer/however she identifies woman on the show, but I’m still not stoked on her transphobic joke (though to be fair, there’s a lot of stuff on this show I overlook for the sake of entertainment). They’re definitely setting Corinne up to be the villain, and there’s a lot of talk in the edits about “decisions” and “sex,” but we don’t know who they’re talking about, as of yet, though they want us to think it’s about Liz. Also, Backstreet Boys are gonna be on this season, which is a huge step up from whatever random country star they usually get, so that’s exciting.

While this episode itself didn’t have any huge shockers (a drunk person! a huge reveal! etc.), I think that’s fine. That’s more like real-life, and that’s what Nick says he’s going for, after all. We’ll see what happens this season, but I’m feeling optimistic for him.

What did you think of this episode? Tell us @BritandCo!

Rosemary Donahue
Freelance Editor at Brit + Co. Freelance writer everywhere. I like my dogs more than I like most people.
Pop Culture