The Bachelorette Recap: There Was Blood, I Guess 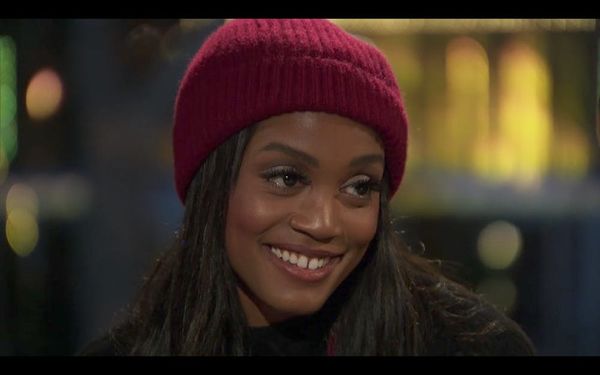 The previews promised that this episode of The Bachelorette, building on last night’s emotionally and racially charged installment, would be a bloody one, and while it was, the long-teased fist fight between Pretty Boy Pitbull Kenny King and racist Lee does not actually happen, and isn’t that for the better? While it may have been briefly emotionally satisfying to see racist Lee get pummeled, violence is never the answer, kids, particularly when it comes to Rachel’s journey to finding everlasting love.

Rachel ultimately decides that racist Lee has not been telling the truth about Kenny and sends him home. She and Kenny walk toward a helicopter away from the drama but Kenny can’t resist and heads back to remind Lee what a “snake and a b***h” he is. This irritates Rachel but Kenny assures her that he is not easily set off and that his wellbeing depends on not bottling up his feelings. Appreciating his honesty, vulnerability, genuineness, and all of the other words in the Bachelorette drinking game, she gives him a rose.

Lee is not the only bro who needs to go. A rose ceremony happens shortly afterward with two eliminated. Increasingly cocky Josiah talks a big game, but Rachel, having called him out for not asking questions about her, denies him a rose, along with with education software developer Anthony. For the record, Batman villains The Penguin and The Ventriloquist are still around.

Now, it’s off to Copenhagen with still too many dudes. She takes unlikely frontrunner Eric on a solo date where they enjoy an authentic Danish hot tub experience and the universal joy of an amusement park. As a coasterhead, I know that love can flourish when two are hundreds of feet in the air with the possibility of throwing up. Over dinner, Eric is vulnerable (drink) with Rachel and tells her about his difficult relationship with his mother; this brings him closer to Rachel and he gets a rose. What is the rose budget on this show? Do they reuse them every time?

Of course, the best way to deal with too many dudes is to make them fight for your honor in viking games. The bros, sans Eric and Will, battle with honor or as much honor as one can hopping around and pushing each other in fabulous furs. And then there was blood. But, whatever. Kenny and Adam cut each other’s eyebrows in the final battle, which Kenny wins. All of that buildup of blood and mayhem and it’s just two dudes goofing around? Never trust advertising.

Later, Kenny, free from the burden of Lee’s lies, is still unable to let loose and enjoy his time with Rachel, mostly because of how much he misses his daughter. He and Rachel talk candidly about it and, with no love lost, she sends Kenny home. The dream of Rachel becoming Mrs. Pretty Boy Pitbull Kenny King is dead. Perhaps inspired by the viking spirit, Rachel continues to lop off the heads of her remaining suitors. A solo date with Will in Sweden doesn’t spark any romantic feelings and she decides not to give him a rose.

But the carnage isn’t over! Rachel must eliminate one more man at the rose ceremony, either because there are still too many dudes or because useless Chris Harrison needs more airtime. Rachel cries and has to excuse herself for a minute because things are getting SO EMOTIONAL in this journey. But she must continue to crush these men one by one and she returns to give roses to all but Alex. Alex. I have no clue who that is. I completely forgot this dude was on the show.

With that, I am shocked and thrilled to report that there are only six men left on this show. Six! Last night, I swear there were sixty. Six means we have to start a leaderboard ranked in order from most likely to not be emotionally destroyed by Rachel and least likely.

1. Peter: With that gap tooth, impossible prettiness, and endless charm, I would be shocked if Peter didn’t at least make it to the top two, though deceptive advertising for next week indicates that he will make Rachel cry.

2. Bryan: The Colombian chiropractor is the smoothest talker and wettest kisser on the show and I can’t stand him, but Rachel is totally falling for it. While my fingers are crossed for a surprise elimination, Bryan’s probably in it for the long haul.

3. Eric: His maturity level is questionable but he’s good fun on solo dates and seems to keep Rachel guessing.

4. Dean: He’s too young and has the very white teeth of a psychopath but Rachel has had a lot of fun with this little dude.

Tied for Las:- Seriously, The Penguin and The Ventriloquist are still on this show only because Rachel thinks she’s actually Batman.