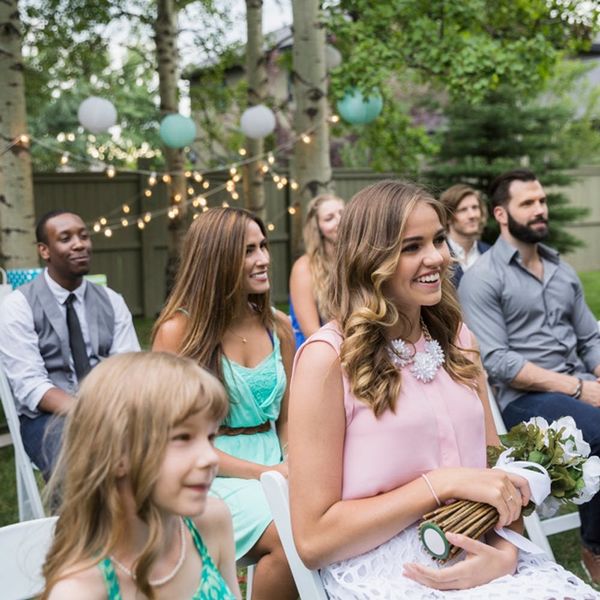 Weddings have changed a lot over the last 10 years. Today, couples are spending more time and money planning for the big day, investing in gorgeous hand-lettered invitations, lush bouquets, and dessert bars. Many wedding trends come and go, but there’s one that always stays the same — there are tons of single wedding guests looking their best. Dating app Plenty of Fish recently conducted a survey that solidified weddings as one of the best places to meet a potential partner.

The survey, which polled over 3,000 app users, found two camps when it comes to meeting other singles at weddings. On one hand, over 40 percent of respondents say that weddings are a good place to hook up with someone — and on the other, some feel that nuptials are conducive to meeting a potential S.O. While the lines between these two can certainly blur, the overall feeling of respondents was that weddings are an ideal venue for interacting with other singles.

Part of the fun of attending a wedding is getting to dress up. The survey reflected this sentiment: 21 percent of people feel especially keen on meeting others at weddings simply because they’re looking their best. This is especially true when you consider the wedding party (perhaps the best dressed of them all, other than the bride!). About a fifth of people say that they’ve hooked up with someone in the wedding party.

While weddings are seemingly great places to make a physical connection, the survey revealed that people also see weddings as great places to begin a romance of their own. The reason: Over 50 percent of respondents say it’s so much easier to start a conversation at a wedding. Whether because of the romantic mood, dancing, or drinks, weddings certainly are events full of happy people willing to make the first move. In fact, 10 percent of people surveyed said they had actually crashed a wedding.

But, who’s making all these moves? The survey showed that more than 40 percent of the time, women are the first to approach potential suitors. More often than not, anyone bold enough to attempt romance at a wedding did so at a friend’s wedding — less than a third of people thought about talking to other singles at a family member’s nuptials.

All of this attempted romance leads us to wonder how successful wedding flirting actually is. According to the study, 16 percent of survey respondents met someone at a wedding they went on to have a relationship with. Maybe they’re the lucky ones who caught the bouquet!

Have you ever met a partner (or hooked up with someone) at a friend’s wedding? Tell us every detail on Twitter @BritandCo.

Gabrielle Gresge
Gabrielle Gresge is a Chicago native and journalism student at the University of Missouri. While not chasing deadlines, she enjoys giving campus tours, exploring her new home, and missing her old one. She loves to write about these experiences in her own handwriting at gabriellegresge.wordpress.com.
study
Relationships
study
More From Relationships