Now You Can Use a Campfire to Charge Your Phone 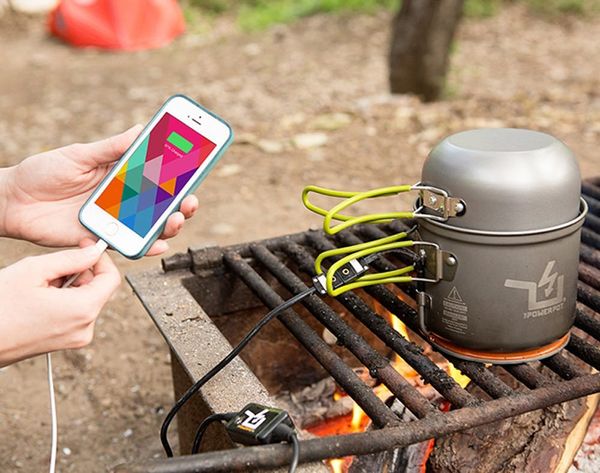 Alright. You’ve left behind the hustle and bustle of the city for a little silence and recentering with mama nature. You’ve set up one serious camp, and you’re ready to take a photo of the little temporary home you’ve so proudly built for yourself when you realize it: Your phone is dead. And while your campsite might have toilets that flush, it doesn’t have a single solitary power outlet to charge the one thing you just can’t do without.

That’s right. While you’re warming up that water for your instant coffee and oatmeal, the little image of a battery in the corner of your screen will be getting filled up with POWER!

No matter if you’re using a camp stove or a real-life wood-fueled fire (you adventurer, you), The PowerPot will generate up to five watts of power. To take a phone from zero percent to 100 percent, it takes two to three hours, which is pretty on par with a power outlet.

Taking this bad boy into the backcountry? You’re looking to add 14 ounces to your load. The lid can be used as a second pot, and the entire set up can hold two quarts of water. If you’re like, “Yeah, but I’ve got my sweet solar power charger,” well, chances are, that thing is heavy, and if the clouds decide to roll in (we promise, they will not ask your permission), you’re just SOL.

It all adds up to you going back to civilization (aka somewhere where you actually have service), then Instagramming that photo of you wielding a hatchet… or eating a PB+J by a serene lake… or just looking like a general wilderness badass.

The thought of electricity combined with fire and cooking and your phone might scare the crap out of some of you. Take a deep breath and put your faith in the silicone-coated and flame-resistant handles and cables. Just trust the creators. They’ve tested this thing probably more times than you’ve even gone camping.

Beyond camping, The PowerPot could potentially be a nice add to your emergency kit for blizzards, earthquakes, tornadoes, thunderstorms or other power-outage situations that we don’t really like to dwell on but are best to be prepared for.

You may have seen The PowerPot and its developers, materials scientists David Toledo and Paul Slusser, during their recent appearance on “Shark Tank.” They’ve already raised $1 million, with some help from a Kickstarter campaign, and The PowerPot even received the Editor’s Choice Award from Backpacker Magazine. If the Power Practical team follows through on their plans to offer the pot in larger sizes, there could be some pretty cool social implications, like providing electricity to remote villages that are currently doing without. You can get yours and its handy mesh storage bag in the B+C Shop now for $149.

Who’s ready to to go rustic with The PowerPot? Let us know your thoughts + camping plans in the comments below!

Lex Monson
Alexis is the co-founder of Punkpost, the app that lets you send handwritten cards (yes, handwritten by a real human) in the amount of time it takes you to send a text message. The exclusive card collections are created by a community of artists and designers and hand letter pressed on high-quality cotton paper. Get the full experience by downloading the app from the iTunes Store.
Camping
Tech
Camping
More From Tech