These Olympic Sprinters Had the Strongest Style Game in Rio 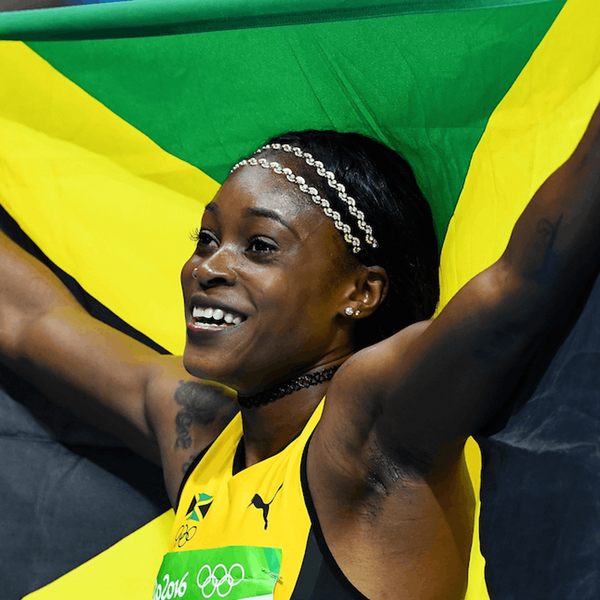 No matter how you usually feel about watching sports on TV, there’s no denying that the Rio Olympics are delivering big-time in the entertainment department. Unexpectedly, they’ve also been giving us some serious style inspo to boot! We’re STILL buzzing about those opening ceremony outfits and relishing all the deets about Gisele Bundchen’s fierce catwalk, but last night, we simply couldn’t turn away from the women’s 100m finals. More specifically, from the amazing accessories and beauty looks these six fierce fashionistas were rocking! Who knew sprinting could be this stylish? Check out our favorite looks from the race below.

1. Elaine Thompson: The 24-year-old Jamaican runner took home gold, completing the 100m sprint in just 10.71 seconds. (Um, wow). As she proudly held up her country’s flag in celebration, it was clear she also deserved gold for her style choices, as well: Just take a look at her simple on-trend tattoo choker and statement-making double strap headband.

2. Natasha Hastings: The 30-year-old American sprinter showed off some seriously shiny footwear as she qualified for the finals of the women’s 400m race. Before she took off, we caught a glimpse of her metallic gold shoes from Under Armour and were immediately smitten. While we couldn’t find her exact sneaks for purchase, we DID find a pair of metallic light-up SanYes USB charging LED lights shoes ($22-34) that had a similar feel.

3. Shelly-Ann Fraser-Pryce: Joining her teammate Elaine on the podium, Jamaican sprinter Shelly-Ann took home bronze in the 100m. Wearing her country’s colors with pride, Shelly-Ann kicked things up a notch by sporting a bright ombre ponytail featuring Jamaica’s own yellow and green hues. She complemented her bright hair with a gold headband and shimmery temporary tats (like these New Home Innovations Mettalic Temporary Tattoos [$12]), winning serious style points along with her medal.

4. Frentorish “Tori” Bowie: America’s Tori Bowie took home silver after completing the 100m run in 10.83 seconds. Along with the medal, she won our hearts with her charming smile, kick-ass eyeshadow (we can’t help but wonder if she predicted the future when she chose that silver hue!) and bright floral patterned headband (similar to this Hippie Runner Headband [$11]). So trendy!

5. Seren Bundy-Davies: 21-year-old Seren competed for Great Britain in last night’s 400m qualifiers and, although she didn’t make it into the finals, she did catch our eye with those reflective shades. They looked so cool, in fact, that now we can’t stop daydreaming about these Pink Duramo Visor Running Sunglasses ($117) from Seren’s brand of choice, adidas.

6. Rosangela Santos: Giving the Jamaican gals a run for their money, 25-year-old Rosangela, who lives in DC but competes for Brazil, matched all of her accessories to her sprinting outfit. With a green-and-yellow headband, green Olympic manicure and green sunglasses, she was the epitome of hometown pride. She also made sure to include a shoutout to the Games in her outfit with those cute Olympic ring earrings (these Gift Jewelry Shop Olympic Rings Earrings [$16] are just as adorable).

What has been your fave Olympic look so far? Tweet us @BritandCo.