This Genius Woman Used Her Unicorn Frappuccino to Announce Her Pregnancy 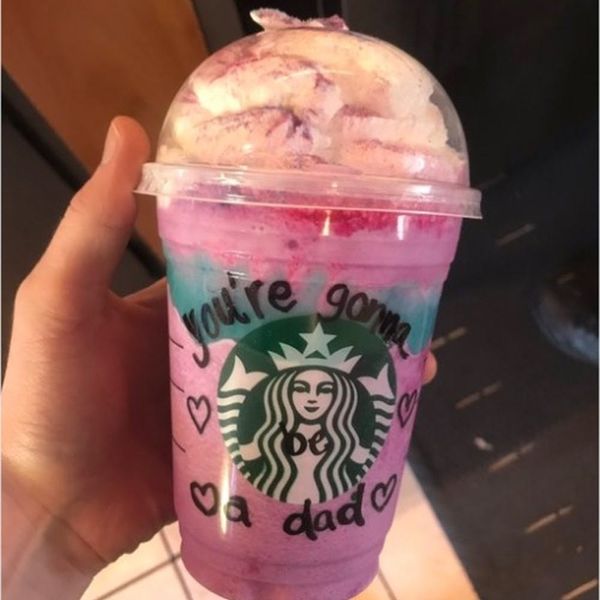 Starbucks’ Unicorn Frappucino is getting all kinds of love from customers across the country (though baristas are certainly not that happy about it). And while folks definitely have all sorts of opinions about the sweet and sour drink, we’re gonna bet they’re nothing compared to the reaction from one fella whose wife used a Unicorn Frappuccino as her pregnancy announcement.

While it’s super nice that one lady was willing to pick up the trendy drink for her bae to taste, we can only imagine that he was totally blown away by the news that was carefully written around the Starbucks logo (with a few adorable added hearts for extra charm).

An obviously thrilled barista posted a pic of the life-changing drink to Twitter with the message, “A customer ordered this to tell her husband that she’s pregnant😭😱❤️ #unicornfrappuccino.” People reached out to Renee the barista, who explained that a customer showed up who had “just found out” that she is pregnant “and was driving to her work to tell her husband… The lady just came through our drive thru at Starbucks and asked us to write on it for her! So, we did and we tried to make it extra pretty for the news as well.”

We’re gonna go ahead and assume this is a totally unique pregnancy announcement, and since the drink will only be around for a few more days, it’s not likely to be duplicated.

Do you think they’ll name the baby Frappuccino?

What do you think about this Unicorn Frappuccino pregnancy announcement? Let us know @BritandCo!

Desiree O
Desirée O is a ‘Professional Bohemian’ who loves anything and everything related to the arts, entertainment, and pop culture. She ADORES being a ‘Newsy’ for Brit + Co, covering all of the latest tidbits of awesomeness that you want to read about. When she’s not writing, she’s either making messy art, going on long adventurous walks with her camera, or poking around over at bohemianizm (http://www.bohemianizm.com/). You can find out about Desirée O and her work at http://DesireeO.com/ or follow her on Twitter @DesireeO.
Pregnancy Announcements
Food News
Pregnancy Announcements Starbucks
The Conversation
More From Food News