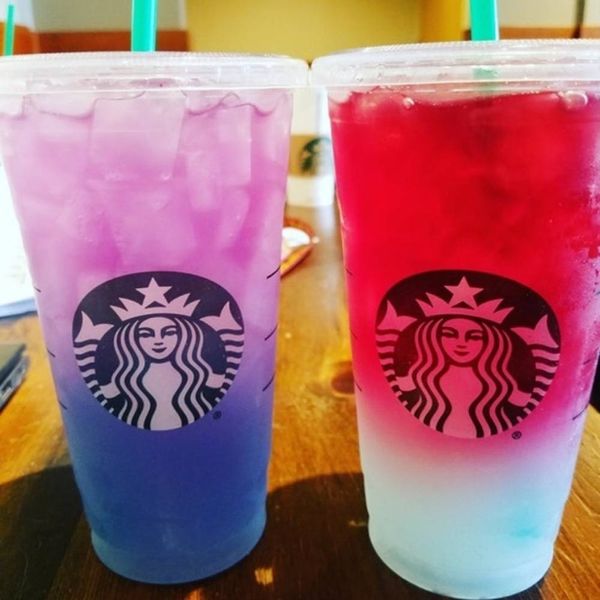 Starbucks’ Unicorn Frappuccino blitz was as fast as it was furious, and while opinions are certainly divided about its scrumptious success (plenty of folks loved it, while Katy Perry wasn’t into it and baristas were downright flipping out over it), it now looks like there’s another unicorn drink to tempt your taste buds. Introducing Unicorn Lemonade.

Just as pretty (or even prettier?) than the Unicorn Frappuccino, Unicorn Lemonade is a secret menu item (meaning its not official) that uses the leftovers from last week’s super viral drink. That means, if your local Starbucks happens to have any of the blue and pink powder still in stock, then (if you ask politely, natch) you have one of two options.

unicorn lemonade. #starbucks #unicornlemonade #unicorfrappuccino #drinks #hypebeast #unicorn @tinnythetitan can you make me this are you working today?

A now-deleted Reddit post revealed, for one option, “the first half is [lemonade] with the blue powder and the top [is lemonade] with the pink [powder].” Simple enough. And sounds delish! Option #2 “is just a lemonade with the blue powder on the bottom and then passion tea on top. If you put extra ice in the cup you’re able to layer it :)” The result is another take on the sweet and sour sips, but much thinner, totally tangier, and surely WAY more refreshing.

I see all your unicorn fraps and I raise you a unicorn lemonade! 🦄🦄 #starbucks #unicorn #unicornlemonade #delicious #sopretty #unicornfrappuccino

If created with care, you can end up with a stunning rainbow drink that is surely as viral-worthy as its tasty predecessor.

However, if the Starbucks you visit is out of the unicorn drink ingredients, then you won’t be able to nab the lemonade version, which makes this an exclusive option for anyone who can manage to snag one. Enjoy!

Do you want to try the Starbucks Unicorn Lemonade? Let us know @BritandCo!