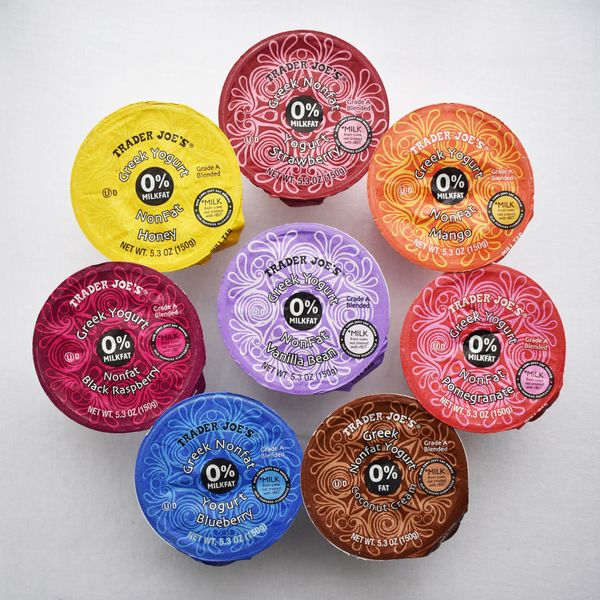 Trader Joe's carries eight nonfat Greek yogurt flavors ($1 per cup) — not including seasonal flavors or full-fat varieties — and they all sound pretty dang enticing. We picked 'em all up and ranked each so you know which ones to hard pass... and which ones you absolutely need to try.
Coconut Cream: With all of the delicious coconut products on the market today, we thought this one had potential. Sadly, it smells and tastes like sunscreen (not that we've ever eaten sunscreen). Apart from the chunks of coconut, which were unsettling, it has a pleasant texture, but we just couldn't get past the taste.
Pomegranate: Fair warning: This stuff is beige. We always appreciate a lack of artificial coloring, but opening a yogurt that looks more like hummus is a little off-putting. The flavor is not bad, but it tastes more like generic fruit than pomegranate.
Vanilla Bean: We love vanilla bean ice cream, so we were hoping this would taste like dessert. It's definitely sweet — overly so, packing in 17 grams of sugar per serving — but it has a chalky texture and lacks a strong vanilla bean flavor.
Mango: We saw this yogurt's pastel orange hue and got a whiff of its pleasantly tropical smell, and we thought we had a winner — but its slightly artificial taste knocks it out of the top three.
Blueberry: When we peeled back the foil on this yogurt, we knew we were in for a sugar ride. Kids would love the sweet, blueberry-studded substance, but it's a little overpowering for someone with less of a sweet tooth.
Black Raspberry: We were surprised that something as candy-like as black raspberry would get such a high ranking, but we were into this flavor. It has one of the smoothest, fluffiest, mousse-like textures out of all of the yogurts. It has a very strong fruity flavor, so don't pick it if you want something more mellow.
Honey: Now this is a Greek yogurt. Even though it's non-fat, Honey has the luscious, rich texture of yogurt made with whole milk. The honey flavor really comes through, giving it a balanced, natural-tasting sweetness. We'd love to eat this with fruit and granola in the morning.
Strawberry: We knew we would love this flavor as soon as we tore off the lid. It looks, smells, and tastes just like the extra- sugary strawberry yogurt from your childhood but with a bit less sugar. The texture is slightly chalky, but we didn't care. We wanted to keep eating it for its princess-y pinkness and juicy strawberry pieces, which made it our favorite.

Sara Cagle
Sara is a food and lifestyle freelance writer in Los Angeles. She writes a weekly events column for the Los Angeles Times and loves writing food content for Brit + Co. After all, the English language's most fun adjectives are best applied to delicious foods. In her free time, she's a hip hop dancer, avid moviegoer, and thorough face-mask user.
Grocery Shopping
Healthy Eating
Grocery Shopping
The Conversation
More From Healthy Eating