Here Are 5 Tricks for Spotting Celebrities at Disneyland 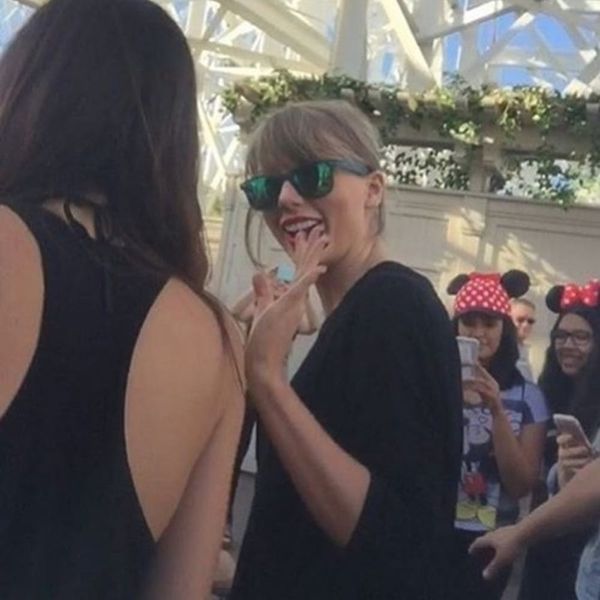 Whether you plan to head to one of the many amazing Disney parks for the ultimate date with your boo or are visiting before some of your fave rides and attractions say goodbye for the final time, it always fun to check out who else is visiting the most magical place on Earth at the same time. And every once in a while, you’ll have the chance to spot a very special visitor, i.e. one of the many celebrities who visit each year. If you want a little advantage, here are five ways to spot celebrities at Disneyland.

1. Play spot the plaid. Celebrities are often escorted around the park with a VIP tour guide. Though anyone can hire one of these helpful in-the-know folks, their services don’t come cheap. Starting at $2,400 for six hours, it’s often high-profile peeps and celebrities who are accompanied by the plaid-wearing Disney employees. Check out the pic of Meghan Trainor, Chloe Grace Moretz and Brooklyn Beckham above and you’ll spot one of these helpful tour guides in action.

2. Watch superstar social media. Celebs often keep fans in the know of their every (public) move, so keep an eye open for your fave stars giving a little Disney shout-out over Twitter or Instagram. Check out Gwen Stefani’s pic for a prime example.

4. Keep an eye on alternate entrances. Not all celebs require special treatment and added security, but some stars most certainly do. That’s why keeping your eyes open for alternate entrances to rides and attractions can help you spot your fave public figure. Slipping past lines may seem like an unfair advantage for stars, but when you consider the craziness it would cause if they stood in the queue for hours, it’s not such a big deal after all.

5. Sudden security. While you’re watching those alternate entrances, also keep an eye open for added security suddenly wandering around. Well-known visitors, such as Taylor Swift, often have to have personal guards around while they’re in such a public place, so if you happen to see a super serious, daunting lady or dude, a celeb might be in the area.

Have you ever spotted a celeb at a Disney park? Tweet us @BritandCo!

Desiree O
Desirée O is a ‘Professional Bohemian’ who loves anything and everything related to the arts, entertainment, and pop culture. She ADORES being a ‘Newsy’ for Brit + Co, covering all of the latest tidbits of awesomeness that you want to read about. When she’s not writing, she’s either making messy art, going on long adventurous walks with her camera, or poking around over at bohemianizm (http://www.bohemianizm.com/). You can find out about Desirée O and her work at http://DesireeO.com/ or follow her on Twitter @DesireeO.
Disney
Celebrity News
Disney