Morning Buzz! One of the Bachelor Contestants Dressed Up As a Shark and People Can’t Even + More 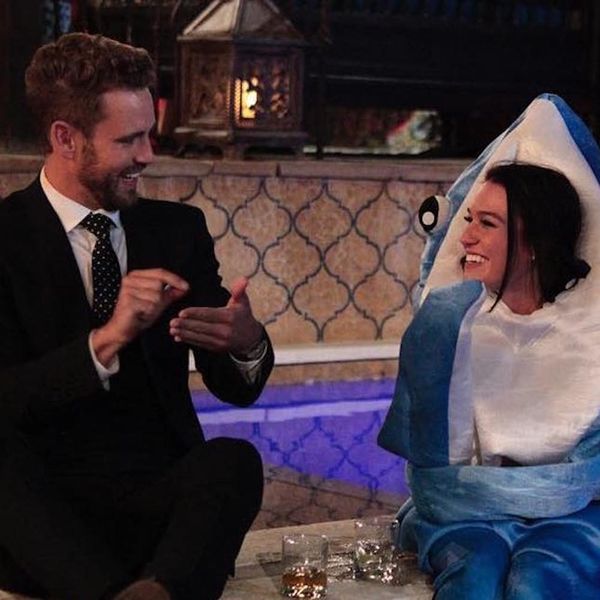 From a memorable Bachelor debut to *another* wedding for Michael Phelps, check out six of today’s top news items below.

1. On the season premiere of The Bachelor, Nick Viall once again started a journey to find love, and as he met a slew of beautiful women in the standard Bachelor evening gown attire, one of them really stood out — because she was wearing a shark costume. Now, 23-year-old Alexis thought she was wearing a dolphin costume, as she’s an aspiring dolphin trainer. Nick expressed some concern over her inability to tell the difference, but — SPOILER AHEAD! — she ended up getting a rose anyway. Twitter was caught somewhere between being in love with her and sharing Nick’s concern over Alexis’ shark/dolphin confusion, but either way, she sure caught their attention.

2. Michael Phelps and Nicole Johnson had a *third* wedding on New Year’s Eve. These two just can’t get enough of marrying each other! After a quiet summer ceremony then a Cabo wedding in October, Michael and Nicole threw a Gatsby-inspired 1920s wedding party on New Year’s Eve, according to E! News. Nicole looked stunning in sequins, and the two look as happy as ever. Congrats to the newly-newly-newlyweds!

3. Singer Rebecca Ferguson says she will sing at Trump’s inauguration on this one condition. After many artists reportedly declined an invitation and the Rockettes learned their jobs could be in jeopardy if they refused to perform when Trump is sworn in as President, there seems to be a little traction on who might be on board. British singer Rebecca Ferguson says she was asked, and will oblige only if she is allowed to sing “Strange Fruit,” a protest song from the ’30s made famous by Billie Holiday and later Nina Simone. Rebecca says the song “has huge historical importance” and “speaks to all the disregarded and down trodden black people in the United States.” She ends her note by saying that the song is “a reminder of how love is the only thing that will conquer all the hatred in this world.” So far Trump’s camp has not responded.

4. An incredible moment of a toddler saving his twin brother from a dresser falling on him was caught on camera and it will take your breath away. The children’s father released the footage to remind parents of the importance of bolting down and securing furniture. The two-year-olds are seen climbing on their dresser when it tips over, trapping one of them underneath. Somehow, his brother manages to push the dresser off of him. Thank goodness they were both okay.

5. Whoa, the new Fifty Shades Darker Trailer is as spooky as it is sexy. Stalkers! Helicopter crashes! Guns! We’re so ready for this.

6. Quote of the day: “You all lost Princess Leia and Carrie Fisher; I lost my hero, my mentor, my mirror.” Joley Fisher has penned a beautiful and heartbreaking tribute to her sister Carrie. Read the whole thing here.

Will you see the new Fifty Shades movie? Let us know over @BritandCo!