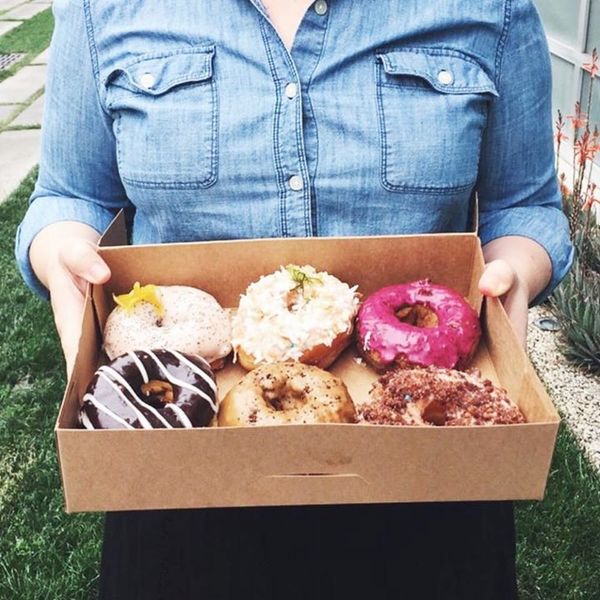 June 5 is National Donut Day, and we can think of plenty of ways to celebrate. Whether you’re baking your own batch of red velvet ‘nuts, making your sweetie some heart-shaped ones or giving Fido his own homemade blueberry-apple treats, this is a holiday that everyone can enjoy — including vegans. Across the US, there are vegan donut shops making our favorite hole-shaped pastries. Here are 10 of our go-to places that we’d even consider making a road trip for.

1. Dun-Well Doughnuts, Brooklyn: There’s a reason this Brooklyn-based vegan shop was named one of America’s best donut shops by Food + Wine. If you can’t get to the NYC borough, get an eyeful of their photos. Dun-Well’s Instagram feed is packed with delicious creations like the peach melba stuffed with raspberry jam, Star Wars-shaped goodies or Mexican chocolate that make us want to fly cross country to get some of the vegan goodness.

2. Donut Friend: Vegans will rejoice with the many options at this Los Angeles shop. Fill yours with the vegan vanilla pastry cream and coconut bacon. Or if you’re feeling frisky, opt for the ice cream donut sundae. For custom orders, mini fritters are the way to go. We’re fans of the Jets to Basil, White Chocolate Stripes and Bacon 182 flavors.

3. Pepples Donut Farm: If you’re in the Bay Area, you can find these all-vegan hole-y treasts in 22 different locations, including the Ferry Building in San Francisco. For fresh-out-of-the-oven apple fritters, be sure to head to the Oakland shop and snag them as soon as they’re ready (they usually sell out quickly!)… and stay for the delicious brunch.

4. Voodoo Doughnuts: When a craving strikes, the original Portland, OR location of the popular and quirky chain is open 24/7. Lines usually wrap around the store, but the shelf of vegan options is worth the wait. We’re partial to the ODB flavor that’s covered in Oreo cookie crumbles and drizzled with peanut butter. (Photo via Vegan Miam)

5. Mighty O! Doughnuts: These organic vegan edibles are simple but delicious. Based in Seattle, this shop keeps it basic with cinnamon and sugar or “topless” varieties (no toppings at all), but the simplicity makes these cake dough balls divine. Check out the seasonal and French Toast flavors.

6. Vegan Treats Bakery: This amazing vegan bakery in Bethlehem, PA, has everything you’ve ever dreamed of, including soft serve, wedding cakes and French pastries. For donuts, snag the Boston cream, jelly and coconut custard.

7. Ronald’s Donuts: Ronald’s looks unassuming from the outside, but the Las Vegas outpost is family owned and much talked about by vegans. The top two rows are all vegan. The maple bar and apple fritters are the standouts, and you can even get soy milk to dunk your donuts for the complete experience. (Photo via Vegan Miam)

8. Le Cave’s Bakery: Open since 1935 in Tucson, AZ, this bakery offers vegan and gluten-free options. Everyone raves about the mango-filled and glazed… even omnivores. (Photo via Tucson)

9. Tandem Doughnuts: Started by a husband-and-wife team, these vegan gluten-free delightful treats can be found at the Clark Fork Market on Saturdays in Missoula, Montana, and local shops all around town. Definitely snatch up special flavors like Japanese Green Tea, Lavender Lemon and Carrot Cake with Toasted Walnuts.

10. Red Rabbit Cooperative Bakery: If you’re in Austin, buy fresh vegan gobs of goodness from this bakery at the Mueller Farmers’ Market or in local shops throughout the city. The cinnamon sugar donut holes and the coffee glazed are said to make you see the world in a whole new light.

Did we miss your favorite vegan doughnut? If so, tell us in the comments!