Rock On: This Headband is Also (Drumroll) Headphones! 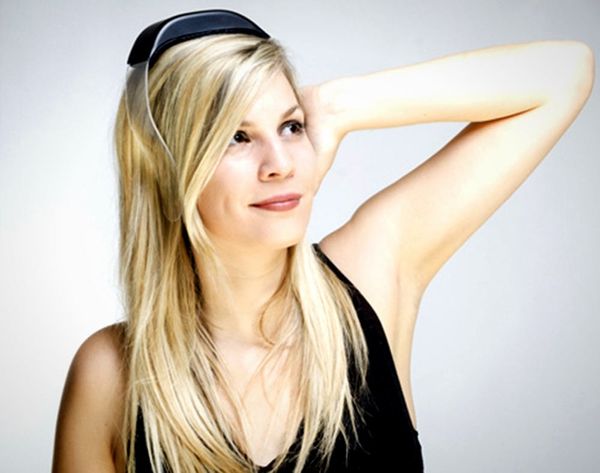 We know you’ve been looking for a way to up your headband game ever since seeing Lupita Nyong’o wow on the Oscars red carpet and we have one that really rocks. No, really really. Yes, it looks super cool, but the true beauty behind this band is that it works like a pair of headphones. Forget the Academy, we’re taking these babies to the VMAs!

Renaud Defrancesco, a student at Swiss school of the arts ECAL, designed the Vibso headphones on his quest to create a new way to jam out. Instead of in-ear buds, the band creates sound using an electromagnet at the top. Hidden under black opaque plastic, it sends vibrations down the acrylic glass that covers the ears.

These headphones take “music sharing” to a whole new level. Vibso connects to your Bluetooth-enabled music devices to stream tracks you can blast while staying aware of what’s going on around you. Even though you know they are still there, the fellow commuters on your morning train won’t hear what you’re listening to so go ahead and blast that One Direction, no shame in your Spotify game. If you do want a friend to listen in, they can just by touching their ear to the device. Did we just get a chill from how awesome that sounds or is it just the sound vibrations?

Maybe we should have titled this post, “Party Rock is ON Your Head Tonight…” Either way, we want to get these on our head now.

Unfortunately these aren’t on the market anytime soon but we think Renaud will have plenty of orders when and if they ever are. The headphones will still function if covered with fabric so we have an idea for our first office pair: DIY project, y’all!

Would you rock the Vibso headphones?

Lisa Raphael
In her past professional lives, Lisa has served the masses as the Editorial Director at Brit + Co, Bieber Whisperer at J-14, Golden Girls Fan Club Prez at Lifetime and Talk Show Host Understudy to Katie Couric. Now, she's taking on the sports world at The Relish, teaching Hairography 101 in her spare time and will forever be trying to fill the hole Zayn Malik left in her heart.
Music
Tech
Music
More From Tech